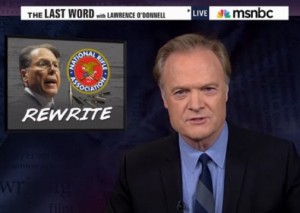 On Tuesday night’s The Last Word, host Lawrence O’Donnell again devoted his “Rewrite” segment to “blood-drenched lobbyist” Wayne LaPierre, Executive Vice President of the National Rifle Association, and to “defenders of movie theater mass murderers’ right to use 100-round ammunition clips on their assault rifles.”

Part of his essay, however, was devoted to a comparison of our reaction to “shoe bomber” Richard Reid, which is illustrative in a number of ways.

O’Donnell’s “Rewrite” segment has become the political essay equivalent of a heavy-bag workout in a South Boston boxing gym, and last night, he tore into pro-gun extremists with punishing glee. His jab of choice was a clip of Wisconsin Republican Sen. Ron Johnson‘s declaration that if you attempt to limit extended magazines, like the 100-round clip that Aurora mass shooter James Holmes used, “you restrict our freedoms.”

“You restrict our freedoms,” O’Donnell repeated. “This from a guy who obediently removing his shoes at airports to prove he’s not going to blow up an airplane, even though he can also prove to all those TSA agents that he is a United States Senator. The hundred-round clip is not about freedom.”

He goes on to contrast the instant acceptance of removing shoes at airports in response to “crazy, incompetent Al Qaeda loser” Richard Reid, who “wanted to blow up an airplane with something in his shoe that could not have actually blown up the airplane, even if had worked.”

O’Donnell went on to blast LaPierre, explaining that “California has made the sale of hundred-round clips illegal. California restricts those magazines to ten bullets. And so, if you’re an aspiring mass murderer here in California, and you decide tonight to obtain your killing tools legally, as our most recent mass murderers have done, you will be forced to reload after your first ten bullets, and if you try doing that in a packed movie theater, I promise you, you will not finish reloading. You will be taken down by the freedom of the people in that theater to attack you the second you have to stop firing and reload. The ten-bullet clip is about the freedom to stop mass murderers after they’ve fired ten shots, instead of a hundred.”

“Wayne LaPierre doesn’t want you to have that freedom,” O’Donnell spat, working the NRA executive’s rib cage. “Wayne LaPierre wants you to be stuck in your theater seats, while the mass murderer fires another 90 bullets at you. Wayne LaPierre thinks people like me who don’t think anyone should be able to buy hundred-round magazines are more dangerous than people who empty hundred-round magazines in crowded movie theaters. Wayne LaPierre scares people. I know he scares some of you with his relentless determination to make sure American mass murderers are the very best equipped mass murderers in the world, but he scares the simple-minded members of the NRA even more. He scares them into actually thinking and believing that someone is coming to take their freedom away. He needs them to believe that, soo he can continue to siphon $1 million off their dues money every year to stuff into his blood-drenched pockets.”

As it turns out, Wayne LaPierre’s $970,300 compensation makes him the 11th-highest paid “charity” executive in the country, and given his ability to control both sides of the gun policy debate, he’s a bargain at twice the price. However, a new poll by Frank Luntz, commissioned by MAyors Against Illegal Guns, shows that gun owners aren’t getting what they pay for. The survey of 945 gun owners nationwide (divided evenly by gun owners who were current or lapsed members of the NRA and non-NRA gun owners) found overwhelming support for common-sense measures that LaPierre’s organization opposes.

Bu the Richard Reid comparison exposes the central lie of the gun-crazy wing’s argument, that, as Se. Johnson said, “you simply can’t keep these weapons out of the hands of” those who would terrorize the way James Holmes did. Setting aside the specific shoe-removal measure, the much-derided efforts of the Department of Homeland Security and the TSA to secure air travel, while varying in their logic and execution, actually have worked, in a specific and demonstrable way. Lost in the angst over this is the fact that screening measures have forced the terrorists to use PETN, a substance that doesn’t work. The only successful use of PETN as a primary explosive was an attack that killed 1 and injured 23, and that took 24 kilos of the substance to accomplish. Try fitting that into your shoe.

Does that mean we’ve eliminated terrorism, or even made air travel completely safe from it? No, but we have demonstrably made it safer, and eliminated several types of threats, just as banning these 100-round clips would do. Of course, terrorists will look for other ways to attack Americans, and in fact, they’ve already found one. Over a year ago, an Al Qaeda spokesman named Adam Gadahn issued a call for aspiring terrorists to exploit weak US gun control laws to carry out mass murder like that perpetrated by James Holmes. If and when that happens, Wayne LaPierre, and every Republican or Democratic politician who’s more afraid of him than even the Islamic Terror Menace, will have a lot of explaining to do.

In the aftermath of the Aurora shooting, there have been calls for a cooling of the type of provocative rhetoric that O’Donnell deploys nightly, but if an issue is worth fighting for, it deserves fighters. Maybe Wayne LaPierre ought to step into the ring with O’Donnell.