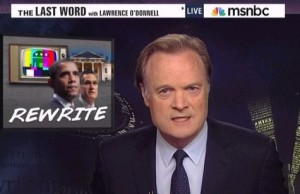 On Wednesday night’s The Last Word, host Lawrence O’Donnell set his sights on recent campaign ads by Rick Perry and, to a larger extent, Mitt Romney with regards to an out-of-context statements from President Obama… and on how the media has treated these.

Obama, you may recall, recently opined that the country had been “lazy” in presenting itself as a desirable place in which foreign nations like, say, China would want to invest. But a recent campaign ad for Perry presented the comment as if Obama were commenting on Americans themselves. O’Donnell (being, you know, Lawrence O’Donnell) made a crack about how Perry cannot seem to remember three consecutive bullet points, much less all ten commandments, #9 in particular.

RELATED: Bill O’Reilly Calls Out Rick Perry For ‘Lazy’ Ad: ‘Was That A Fair Ad?’

O’Donnell then moved on to Romney:

When you spend every day of your life lying about your first name… [Clip of Romney decidedly not saying that his first name is, in fact, “Willard” during the most recent GOP debate] The man’s first name is Willard, as regular viewers of his program have known for over a year. If Willard will lie about that, then nothing Willard says probably feels like lying. If there is a pathological liar there in the presidential campaign, it is Willard Romney.

He was asked about his lying today, but the question was phrased, of course, in the limp-brained language of the campaign press.

Finally, O’Donnell tore into the mainstream, establishment media for apparently refusing to explicitly call out lies made by campaigning candidates:

Liars like Romney are profoundly bad for this country, but the mainstream media will never call what Romney does lying. And then they will run endless articles filled with the surprise and angst that American voter turnout is as low as it is, that the American voter is dispirited and uninterested in voting

The mainstream media helps deliver candidates to the ballot by never calling them liars, and then is surprised that Americans don’t want to stand in line to vote for the likes of Mitt Romney.