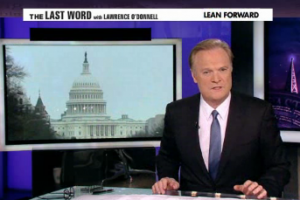 On Tuesday night’s The Last Word, host Lawrence O’Donnell became very emotional, his voice cracking toward the end of a commentary on the defeat, by 38 Republicans, of the ratification of the Convention on the Rights of People with Disabilities, a U.N. treaty that seeks to make the landmark Americans with Disabilities Act a model for nations around the world. The treaty had the support of many Republicans, like disabled Vietnam veteran Sen. John McCain, and a living symbol in disabled World War II veteran and former Senator Bob Dole, but could not overcome opposition from United Nations conspiracy theorists, home-schooling advocates, and somehow, abortion rights opponents.

As O’Donnell explained, the 61 votes in favor of ratifying the treaty were not enough because a 67-vote majority is required to ratify a treaty, and despite support from prominent Republican war heroes, veterans’ groups, and advocates for the disabled, 38 Senate Republicans voted it down.

“It really isn’t controversial,” O’Donnell said. “What this treaty says is very simple. It just says that you can’t discriminate against the disabled. It says that other countries have to do what we did 22 years ago when we set the example for the world and passed the Americans with Disabilities Act.”

But for certain right-wing constituencies, the treaty is controversial, for a cornucopia of made-up reasons. For example, Sen. James Inhofe (R-OK, but not really ok) told something called the Daily Caller News Foundation that ““Unelected, foreign bureaucrats, not parents, would decide what is in the best interests of the disabled child, even in the home,” and that “the Senate was right to reject yet another power-grab effort by the UN.”

Well. yes, except no. According to the resolution:

It’s not clear how, even in the fevered “brains” of the treaty’s opponents, it could be construed as having anything to do with abortion, which even The Daily Caller doesn’t bother to explain. The treaty doesn’t appear to require wheelchair ramps for ovaries, but maybe that’s the problem. Who the hell knows.

Lawrence O’Donnell may not be the best messenger to get through to the Republicans who walked right past a wheelchair-bound Bob Dole to vote this resolution down, but they shouldn’t dismiss the message. “Senator Dole went to the floor today needing just five ‘yes’ votes from old friends,” O’Donnell said. “Bob Dole reached into their hearts today. And found nothing.”

“After the vote,” O’Donnell continued, his voice cracking, “John Kerry said, ‘It was one of the saddest days I’ve seen in almost 28 years in the senate.'”

“We know that when Bob Dole leaves us, which I hope doesn’t happen for a very, very long time,” O’Donnell concluded, “those five men, if they`re still with us, will rise
on the Senate floor and speak in honor of Bob Dole. They will mean every word of their praise for their former leader and faithful friend. But they will know and we will know that on the day when they could have really honored Bob Dole, honored his wisdom, his vision as a legislator, honored his friendship and his personal kindnesses to them over many, many years, they failed Bob Dole. With one word, no, they failed their old friend. They dishonored themselves, and they dishonored the United States Senate.”