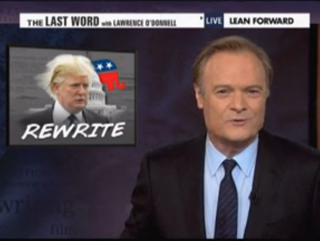 A mere minutes after Donald Trump had gone through the many, many ways he thought Rick Santorum was a loser on Fox News, over at MSNBC, he found himself on the receiving end of the same. It is no big secret that Lawrence O’Donnell isn’t a huge fan of Trump, but what may be news delivered by O’Donnell is his belief that Mitt Romney, Trump’s candidate in the Republican primary, thinks Trump is “a buffoon, and unconfirmable joke, America’s biggest loser.”

RELATED: Donald Trump Blasts Santorum As A Loser: ‘He Wants To Be President? Give Me A Break’

In this installment of the great Trump-O’Donnell feud that seems to have no end in sight, the latter hits all the scheduled stops on the Trump track: that Trump has no money, that his show is a false way to inflate an ego, that he is a laughable excuse for a human being and one day, it will actually hit him. Pointing out Trump’s comments in an interview with CNN’s Ashleigh Banfield in which Trump says that he would like a Cabinet job out of Romney “where I negotiate with some of these countries, because they’re taking our lunch.” He added that he did not want America to “keep losing our jobs to China.”

“The job you want is United States Trade Representative,” O’Donnell helpfully explained to Trump, adding that it was a Cabinet-level position, and that he would have a lot of problems with the confirmation process. “The Chief of Staff of the committee [a job O’Donnell once held] would learn everything there is to know about you… you will be asked in writing about your history of drug use, illegal drug use, and when is the last time you used them.” If that wasn’t enough, “not every little thing in your tax returns becomes public, just the really bad things.” O’Donnell added that he didn’t think that would bother Trump so much since he has a job where “you pretend to fire people who don’t actually work for you,” but that he would have a problem with a ~$200,000 a year salary because “you can’t live on that.”

But that, O’Donnell concluded, was irrelevant, because “Mitt Romney would never pick you to negotiate trade deal with the Chinese,” and that the Romney family wouldn’t hire Trump to “wash their cars.” “Romney knows you’re a buffoon, and unconfirmable joke, America’s biggest loser,” he concluded, before condemning Trump to his perch back on Twitter.