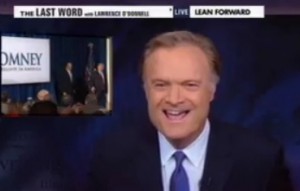 On Tuesday night’s The Last Word, host Lawrence O’Donnell took on the latest iteration of the Donald Trump Magical Birther Tour™, now sponsored by The Mitt Romney Campaign®. During his panel discussion, O’Donnell surmised that the Romney campaign wants “100% of the racist vote in America. They don’t want a single racist to stay home. So they got the Pied Piper of American racism.”

It was a great metaphor, but I think the panel’s conventional wisdom on Trump, and on Romney’s weak response to his Birther claims, is all wrong.

O’Donnell’s metaphor is effective, because The Pied Piper wasn’t a rat himself, but he knew how to play a tune that got all of the rats to follow him. It’s not necessary to believe that Donald Trump is a racist (at least in the sheet-wearing, cross-burning sense that is the only sort of racism conservatives are willing to recognize) in order to understand that his involvement with the Romney campaign, and Romney’s soft backing vocals to the tune, are a naked appeal to racists.

However, O’Donnell, his panel, and indeed, the entire political media are missing the boat when they say Romney’s response to reporters’ questions about Trump’s birtherism makes him look bad, or that he needs to come out and denounce Trump’s rhetoric, lest he suffer with independents.

On board his campaign plane, Romney told reporters, of Trump’s Birther garbage, “I don’t agree with all the people that support me, and my guess is they don’t believe in everything I believe in. But I need to get 50.1% or more, and I’m appreciative to have the help of a lot of good people.”

To the politically engaged, right, left, or center, Romney’s response is an admission of his willingness to do or say anything to defeat President Obama, but we all take for granted that independent voters feel the same way, that they will be turned off by such an abandonment of principle. What Romney’s statement has going for it, unlike a lot of what he says, is honesty. Independent voters can be convinced to value the valueless, and just as they appreciated George W. Bush‘s ability to make a decision, any decision, no matter how bad, they can be convinced to value this sort of honesty, even if you’re just being honest about what a groundless vote-monger you are.

It’s also not a certainty that the Birther stuff will hurt Romney if he continues to tolerate and flirt with it. There may be some people who still deny the racist nature of the Birther narrative, and of Trump’s larger set of accusations about the President’s accomplishments, but that’s the beautiful thing about racism: the people practicing it are often the last ones to know it. They just think they’re telling the “truth,” based on “facts.”

When Mitt Romney says he needs to get 50.1%, he’s really overestimating; he really only needs to get those “independent” voters, who are overwhelmingly white and male. Trump’s Birther drumbeat won’t likely raise questions about the President’s citizenship among them, but they’re also more inclined to forgive Trump’s idiocy as quirkiness, not racism. Meanwhile, the true message of birtherism, the one that Krystal Ball identifies, will continue to resonate: “Even if you don’t think President Obama was born in Kenya, you’ve gotta admit he’s at least Kenyish.”

The long-running strategy has the added benefit of allowing these voters to forgive themselves for their own suspicions and nervousness about the guy with the funny name whom they generously decided to give a shot four years ago. They’re comforted by the apologist likes of Tucker Carlson, who insist it’s somehow bigoted to object to people being conditioned to think President Obama is a Muslim. By the same logic, it’d be racist not to consider the President’s Kenyishness.

The conventional wisdom on Trump also ignores the fact that his utter decimation at the hands of President Obama hasn’t dampened his popularity with Idiot America one bit. More people tune in to Trump’s reality show than the entire Fox News primetime lineup, and about the same as any of the network newscasts. The people who are turned off by Donald Trump are already not voting for Romney.