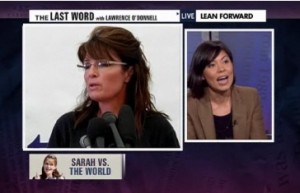 On Monday night’s Last Word, host Lawrence O’Donnell tried to make sense of a recent Sarah Palin interview with Pat Robertson‘s Christian Broadcasting Network, calling in a little backup in the form of “Sarah Palin translator” Alex Wagner. It’s a tough job, to be sure, but in deciphering Palin’s baffling assessment of the crisis in Egypt, I don’t think they quite nailed it. I’m getting pretty good at this, though, so I’ll happily take a stab at it.

O’Donnell and Wagner point out many of the fallacies in Palin’s thinking, but miss out on the larger, more audacious ploy that she attempts: (from MSNBC)

Watching the CBN clips strongly reminded me of the hilarious Jon Stewart bit in which he posits that Palin is a Russian spy. She dots her language with odd, non-specific phrases like “the other countries,” “our leader in the White House,” and “those…things that Ronald Reagan did espouse (rhymes with mouse),”sounding nothing so much as an inept foreign agent trying to blend in by saying, “Why, yes, comrade, I am huge fanatic of sports team!”

Her execution is poor, but her plan is anything but random or idiotic. It’s the time-tested tactic of playing politics with an opponent who is otherwise occupied, and cannot respond.

Palin’s first attack is at President Obama‘s American-ness, a popular theme with her crowd, and the likely genesis of her malformed suggestion that the President wants America to aspire to the Sputnik launch. She says “we need to know what it is that America stands for so we know who it is that America will stand with,” and the fact that this is utter nonsense (we “stood with” the Soviets in World War II) is irrelevant, because the blow lands with her audience, and to hell with everyone else.

For the record, of course, Obama and Gibbs never stop talking about “what America stands for.” It’s what has put us in such a tough spot with Egypt, necessitating that we declare our stand for democracy, but against its use to install a majoritarian tyranny that could, by the way, destabilize the entire region.

Wagner and O’Donnell fail to point out that Palin’s reference to a 3 am phone call, in the next clip, is a reference to the infamous Hillary Clinton attack ad against Obama that ran during the 2008 Democratic primaries. It was noteworthy at the time because it provided Obama’s likely GOP opponent with ammunition, and Palin reloads it here.

They also miss the point of Palin’s suggestion, which is not that the administration utilize some supernatural predictive power to divine the outcome of the unrest in Egypt. When Palin says “…surely they know more than the rest of us know, who it is who  will be taking the place of Mubarek,” she is making a very odd, very concrete suggestion: that the Obama administration make any information they’ve gathered, via intelligence sources and diplomatic back-channels, public. Oddly, Palin wasn’t too happy with the last person who did that.

True, there’s a big difference between the President revealing such information, and Julian Assange, but the harms (if not the legality) associated with each act would be similar.

Obviously, this isn’t really what Palin wants. She is listing demands that are not only impossible for the President to meet, but ill-advised. She’s well aware, for instance, that the US must necessarily appear neutral as to Mubarek’s successor, and exploits that fact as hard as she can. Newt Gingrich employed a similar tactic during the Somali pirate crisis when he demanded that Obama do something, knowing full well that he likely was doing something, and that talking about what he was doing could have cost lives. It’s the political equivalent of punching a guy in the face when he’s holding an armload of injured babies.

But aside from all of this, O’Donnell and Wagner miss the biggest point of all. Palin’s not talking to them, or to me, or to anyone else who hasn’t already formed an opinion of her. She’s talking to a large group of people who have sometimes undefinable problems with Barack Obama, who suspect that he’s just not one of us. The only question that remains is whether that group is large enough to secure her the Republican presidential nomination, or even the White House.