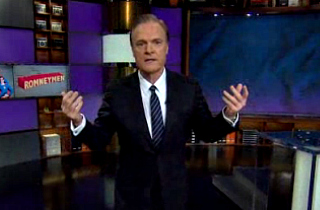 You can take the Southie out of Boston, but you can’t take the Boston out of the Southie, if Thursday night’s The Last Word is any indication. In what can only be described as a masterful hybrid of political essay and one-man dramatic character study, host Lawrence O’Donnell delivered an epic rebuttal to Tagg Romney‘s violent impulses toward President Obama, and indeed, to the entire Romney family. O’Donnell began the segment as the erudite man of letters his viewers know him to be, and ended it as an amalgam of several of my uncles after a few pints, with several castmembers of The Departed thrown in for good measure.

In case you missed it, in an interview with North Carolina radio host Bill Lumaye, Romney son and alleged de factocampaign honcho Tagg Romney said watching President Obama call his dad out over his lies made him “wanna rush down to the debate stage and take a swing at him,” restrained only by a cadre of armed agents, and the knowledge that “this is just the nature of the process.”

Naturally, this didn’t sit well with a lot of folks, who found the combination of Tagg’s over-the-line impulse and privileged self-delusion worthy of mockery and revulsion. For Lawrence O’Donnell, it was an occasion to unload on the entire Romney family. Rather than recap the whole thing, here are the bullet points he touched on:

Now, some of that was over the top (I wasn’t crazy about the photoshop they did of George Romney, for example), but if you view O’Donnell’s performance apolitically, and just appreciate it for the sheer joy with which he draws it to a close, you can begin to appreciate the appeal of unvarnished opinion journalism, that dial that Ed Schultz and Bill O’Reilly always have turned up to 11, which otherwise might have eluded you. By the time he gets around to Tagg Romney’s privileged rage, O’Donnell is like the guy at the bah who’s happy when someone knocks over his whiskey, or distracts him while he’s throwin’ dahts.

O’Donnell points out, as I have, that President Obama never actually did call Mitt Romney a “liar, I did. The President said that what your father said isn’t true.”

At this point, the Southie accent O’Donnell dips into occasionally is dripping off his meat hooks, as he shoves back his chair like a bar stool.  “I’ve been sayin’ all year that ya father lies, and has been trying to lie his way into the White House. So, you wanna to take a swing at someone for calling your dad a liar? C’mon. C’mon. Take a swing at me, and don’t worry, there won’t be any Secret Service involved. Just us. And I’ll make it easy for you. I’ll come to you anytime, anywhere. Go ahead, Taggart, take your best shot.”

Whether you agree with Lawrence O’Donnell or not, or think that brawling is the solution to political disagreements or not (Larry and Tagg ought to settle things over a game of dahts), O’Donnell’s epic rant was nothing if not intensely, compellingly entertaining.