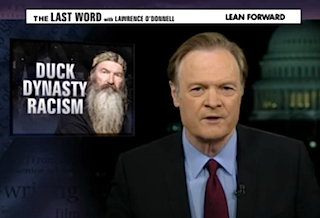 The vast majority of the coverage surrounding Duck Dynasty patriarch Phil Robertson’s suspension has concerned his comments linking homosexual sex to bestiality, among other “sins,” but those weren’t the only controversial remarks he made in his interview with GQ. During his MSNBC show Thursday night, Lawrence O’Donnell chose to draw attention to Robertson’s comments about growing up in the south before the Civil Rights Movement.

Here is the relevant passage from Robertson’s interview:

“I never, with my eyes, saw the mistreatment of any black person. Not once. Where we lived was all farmers. The blacks worked for the farmers. I hoed cotton with them. I’m with the blacks, because we’re white trash. We’re going across the field…. They’re singing and happy. I never heard one of them, one black person, say, ‘I tell you what: These doggone white people’—not a word!… Pre-entitlement, pre-welfare, you say: Were they happy? They were godly; they were happy; no one was singing the blues.”

As O’Donnell explained, “the belief that gay sex is sinful is held by 45% of Americans.” But it would appear that A&E “has absolutely no objection to Phil Robertson’s attempt to rewrite American history in a very important way.” He added, “This has the nothing to do with belief. This is about fact, historical fact.”

And just in case his viewers were not aware of what was going on in the south when Robertson was growing up, O’Donnell informed them that he “was 9 years old when Emmett Till was tortured and murdered for allegedly whistling at a white woman” and “15 years old when the 16th Street Baptist Church was bombed in Birmingham, Alabama.”

“But Phil Robertson wants you to remember a happy-go-lucky life in the south for black people in those days,” O’Donnell concluded, “who sang while they picked cotton and never sang the blues.”

Later, O’Donnell was joined by Eugene Robinson and Joy Reid who were equally offended by Robertson’s comments about African-Americans. At the end of the segment, all three admitted that they have never seen an episode of Duck Dynasty.