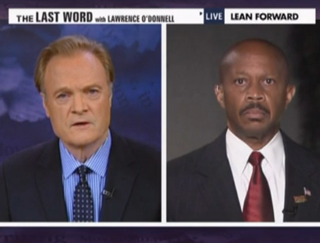 Lawrence O’Donnell began the week once again spending most of his program on the Trayvon Martin case, interviewing many of the major players in the story, including Sanford City Manager Norton Bonaparte, asking him to explain the investigation, what he knows about it, and whether he thinks his police chief will have a job after all is said and done in this case.

How disappointed are you now in your local police department’s management of that situation?” O’Donnell asked Bonaparte, adding notes that the officers on hand did not cover their hands in plastic gloves when handling George Zimmerman, did little recording, and a number of other errors in their handling. Bonaparte replied extending “on behalf of our city our deepest sympathies and condolences” to Martin’s family, and adding that “I’ve always called for a review of the investigation of what they did… so people know that what they did was either appropriate or not appropriate.”

O’Donnell also also whether police officials spoke to George Zimmerman’s father on the night of the shooting, or if there was a connection there, which Bonaparte said he did not have an answer to but “that would come out in the investigation.” Bonaparte insisted that he was asking for a review on all sorts of information about the case, and “based upon that we’ll make a determination regarding Chief Lee as well as the police department.”

O’Donnell concluded asking how Sanford was holding up from the national attention. “This is very serious, and we take it that way,” Bonapart answered, noting that the city’s morale was not very high since “people who have never heard of Sanford, now the only thing they know about Sanford is that Trayvon Martin was killed here.”