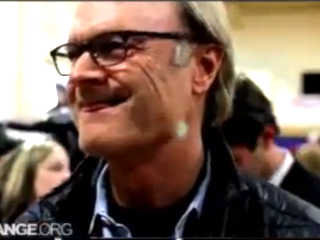 Poor Lawrence O’Donnell. The MSNBC anchor seems to have innocently stumbled upon an event where he was confronted by a reporter working for Alex Jones, who demanded answers about Bohemian Grove and the Bilderberg Group. After exercising the patience of a schoolteacher to explain that Bohemian Grove was “an odd group of naked men” with no power and dismissing Bilderberg as meaningless, he finally gave up and told the reporter he couldn’t argue with him because “you know secrets,” suppressing a smile.

About two minutes into the InfoWars “nightly report” (apparently hosted by Alternate Universe Brian Williams) this week, the anchor describes how “corporate media mouthpiece” O’Donnell was “schooled.” In reality, it was O’Donnell who had to play grade school teacher, explaining how the world works to their reporter.

The report begins on a bad note. “One thing that perplexes me,” the reporter tells O’Donnell, “is that there is no discussion of secret societies.” “No, I don’t think any of them matter in any way,” O’Donnell replies, clearly thinking that was a good enough answer. The reporter then starts talking about Bohemian Grove and Bilderberger, and O’Donnell has to explain: “Everyone knows everything about Bohemian Grove. It’s an odd group of naked men, and it means nothing.” As for Bilderberger: “I have no idea what that is.”

When the reporter can’t answer where the Bilderberg Group meets, O’Donnell doesn’t hesitate to let him down. “That’s a lie; people are lying to you.” He then tries to explain that “the world is a much simpler place than you think it is. The things you don’t like in the world are usually explained by stupidity.” “Evil explains next to nothing in the world,” he continued, “We are not smart enough as a society or as an elite to come up with conspiracies that work.”

O’Donnell then turns to someone off-camera, who appears to shout out the Yale group Skull & Bones as an example of a functioning conspiracy. “Skull & Bones? They’re a fucking college group, Jesus,” O’Donnell responds, clearly at this point exhausted of his patience with the InfoWars crowd.

This goes on for some time until O’Donnell clearly realizes this conversation isn’t going too far, and when the reporter explains that he is trying to have a dialogue but clearly found disagreement, O’Donnell mocks, “I can’t disagree with you because you know secrets.”