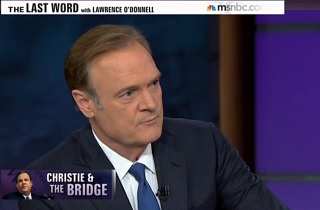 The unfolding Chris Christie Bridgegate scandal took a sad, serious turn Wednesday when it was reported that a 91 year-old woman was delayed medical treatment due to the traffic jam apparently caused by high-level Christie staffers, and that she later died. On Wednesday night’s The Last Word, host Lawrence O’Donnell assessed the cold political potential of that death, telling his panel that “She, when we have her name, is going to become the Willie Horton of Chris Christie’s presidential campaign.”

“I haven’t been able to get the name of the 91-year-old woman who was delayed medical treatment that day because of the traffic jam, and eventually died,” O’Donnell said, adding “And we don’t know whether she died because of a delay in treatment, but in politics, that’s not the way they play this game.”

“In politic, she, when we have her name, is going to become the Willie Horton of Chris Christie’s presidential campaign,” O’Donnell continued. “They’re going to pin that name on him. This woman is dead because of action taken by the Christie administration.”

MSNBC.com President Richard Wolffe compared the absurdity of the plot to the Watergate break-in, and said that the story “breaks through all politics, it breaks through the kind of people who only tune in to this kind of network.”

“Christ Christie was sailing,” Wolffe continued, turning to fellow panelist and Christie gubernatorial opponent State Sen. Barbara Buono and saying “all due respect, to re-election. He had his reendorsements lined up. It was not only stupid, it was unnecessary.”

Willie Horton committed violent crimes after being released on a furlough program that then-Massachusetts Governor Michael Dukakis (D-MA) supported, and was then heavily featured in infamous attack ads against Dukakis during the 1988 presidential campaign.

Here’s the clip, from MSNBC’s The Last Word: [you can watch the full segment below]