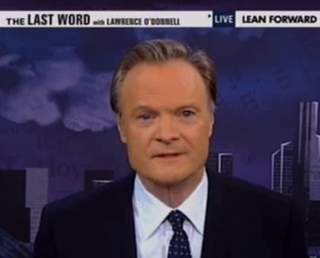 Lawrence O’Donnell‘s final “Rewrite” segment on his program is usually about correcting other media personalities that offend him. But tonight, O’Donnell took to rewriting himself a segment before. On Friday, O’Donnell choked up toward the end of his reading of an email from an underprivileged woman who is dependent on Planned Parenthood. Tonight, he labeled his display a “failure” and, in admitting that even he would have balked at his performance, redefined the unique genre of melodrama that is cable news as something few conceive of it as: an artform.

O’Donnell began the segment with a clip from the teariest man in cable news– Glenn Beck— mocking O’Donnell for choking up over a letter from a woman who is dependent on Planned Parenthood. The irony of Glenn Beck laughing at someone else for crying on television so blatant, and given O’Donnell’s previous flirtations with ad hominem attacks (think calling Bill O’Reilly a “faux Irish tough guy“), the “takes one to know one” approach seemed inevitable. Except O’Donnell refused to toe that lie. Quite the contrary: he established that he had, repeatedly, publicly supported emotional displays should they be honest. “Glenn Beck has cried quite a lot on his show and I never criticized him for it,” O’Donnell noted, later playing a clip of him defending Speaker John Boehner for crying when accepting the top job in the House of Representatives.

But O’Donnell didn’t linger long on Beck, as he had business of his own to take care of. Free of what was becoming his signature smugness, O’Donnell proceeded to take a look at how his segment had been received. I had some fairly harsh words for O’Donnell on Saturday, a few of which he read on air and, in a jaw-dropping display of self-awareness, agreed with. “That is exactly what I would have thought if I had watched someone else do what I did on Friday night,” he admitted, explaining that he had worked specifically on “working the emotion out of” reading that last line and, on that front, “I failed.”

You could probably count the amount of times a cable news host has said the words “I failed” on air in the history of the medium with one hand.

O’Donnell then continued to explain that, for him, crying was not so much a problem– “for some there are places where crying is appropriate and crying is not– I am not a strict observer of that particular piece of the social compact.” Part of this, he admitted, is because “I laugh easily and I cry easily,” and that, he concluded, was part of being a writer. “I need to be overwhelmable by words,” he argued, and while he apologized previously for how his commentary turned out, he embraced this side of him because it was what made him able to convey his beliefs with any conviction. Keeping that in mind, he reminded viewers that “yes, this is a performance,” and that “I do what I can within the performance constraints of this box [the television],” but he could never fully convey who he was– nor could Beck, nor could Boehner.

His commentary introduces a completely new way of perceiving cable news media– as art. Sure, those who consume a great deal of cable news and many who are passionate enough to write about it for a living can understand it as performance art and value individual performances based on that ground of merit, independent of ideology or political impact. It is how many on the left can watch Beck or many on the right can watch O’Donnell and see talent in someone they believe to be thoroughly wrong– and it is how O’Donnell, unlike many on the left, can feel totally comfortable with Beck’s tears while ripping into his arguments. But this had yet to be articulated in such bold a manner as O’Donnell did tonight. When he says “I failed,” he means he created lackluster art that cheapened his passion, irrespective of the political significance of the thesis of that segment. And that’s quite an innovative way of turning the lemons he reaped on Friday into lemonade.