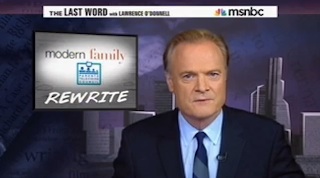 Today, parent groups and fundamentalists are condemning ABC’s Modern Family. Why? Because every single episode is basically identical, they’ve ruined Julie Bowen’s character, it’s a show that uses ridiculously hoary cliches and tries to disguise them with the ridiculously lazy “mocumentary” structure, and it hogs every single television award when actually innovative comedy shows get nothing. Oh, wait. Those are just the reasons people should be condemning Modern Family. No, these groups are just ticked off because, last night, the show did the whole “a young child learns a dirty word and can’t stop saying it” storyline you’ve seen in every single sitcom ever and these people still think four letter words have the ability to conjure up the devil or something. Fortunately, Lawrence O’Donnell, a self-proclaimed “profane person,” is here to defend the show’s (bleeped out) curse words as well as curse words as a whole.

After quoting the silly groups’ claims that the episode will make profanity more accepted, O’Donnell pointed out that it already is accepted. The thing is just that normal people know when you can use it and when you can’t. Which is why a sitcom will have a curse word (or a young actress saying a similar word while the bleep makes it seem like something else) and his telecast will not.

“Realists do not try to put them in a bubble where they will not hear the common language of their culture. The real parenting responsibility in America is not to try to hide your child from the real language, but to prepare your children to hear it. And, if you so choose to guide your children away from using it, to give them a rationale for not using profanity.”

A-fucking-men, Lawrence. This was a good segment.

…even if calling Modern Family “bold” is basically the same as calling Wonder Bread “thrilling.”