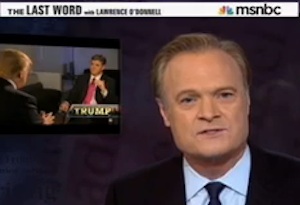 Lawrence O’Donnell fiercely lambasted Donald Trump‘s endorsement of Mitt Romney on Thursday night’s edition of The Last Word. “Every single word that Donald Trump says publicly, every word, is designed to get attention to him so that he can pump up the ratings of his TV show,” O’Donnell jabbed. “…Because unlike Mitt Romney, Donald Trump still has to work for a living, and he so desperately needs the couple of million dollars that he makes on TV that he must spend his life promoting his show — and in show business, any mention of your name is good promotion. Consistency doesn’t matter.”

RELATED: Lawrence O’Donnell: ‘Donald Trump Cannot Afford To Sue Me And He Knows It’

O’Donnell went on to play footage of Fox News’ anchor Greta Van Susteren‘s recent interview with Trump, which O’Donnell alleged was all an act.

“That is now Greta’s submission segment for Best Actress in a primetime cable news show,” O’Donnell snarked. “Keeping a straight face while Donald was talking about running for president, last week, last week! Is something no other woman in cable news could do.”

“He knows he cannot afford to run for president,” O’Donnell continued. “He simply isn’t rich enough, he doesn’t have a billion dollars, in which he knows he would lose, finally in effect he admitted all of that by endorsing a rich, robotic candidate who can afford to run for president and who never changed his message in any way to get Donald Trump’s endorsement, but was willing to appear in a Vegas casino to get that endorsement even though Mitt Romney’s religion is opposed to gambling.”