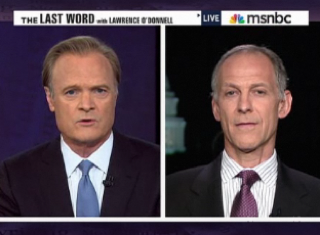 Rep. Michele Bachmann somehow managed to flood the news cycle this week with a bizarre topic: the potential risk that HPV vaccines can pose to young girls. On last night’s program, Lawrence O’Donnell capped off the week with a definitive attempt to put to rest the rumors that HPV vaccines are particularly dangerous. To this end, O’Donnell asked for the expertise of Dr. Zeke Emanuel, UPenn professor, Obama public health adviser and brother of Chicago mayor Rahm.

Dr. Emanuel began his segment by flat out stating that “comparable to other vaccines that are mandated, [HPV is] no more and no less” dangerous, citing measles and mumps shots to be of similar danger levels. “It is much better that girls get the vaccine,” he recommended, as it could eradicate the virus, and the cancerous consequences of having it, after a few generations of providing the shot. While he did not answer directly to the political aspects of the debate, Emanuel argued that politicians should “stick to the science” and that it was, indeed, irritating to see a debate veer away from the facts and using the emotions of hurt families.

“The only reason this thing is mixed up in politics is because it involves sex somehow,” he argued, and because of the personal stories that led to people believing vaccines may cause autism, which he noted had been disproven by studies. The bottom line for him, he told O’Donnell, was that, “as a public health person, you would want girls to get this.”