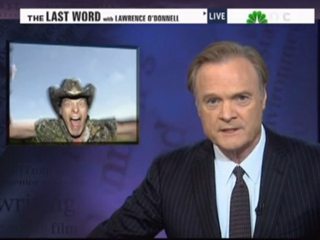 The curious case of Ted Nugent‘s Mitt Romney endorsement and subsequent possibly-violent comments against President Obama are taking up prime real estate over on MSNBC, spending some of the day researching the relationship between Nugent and Romney and, tonight, with Lawrence O’Donnell dedicating his Rewrite segment to the mystery surrounding who approached who in this most bizarre of political unions.

O’Donnell noted that Nugent’s comments about the President and shooting coyotes and going to jail were problematic were somewhat toxic, so toxic that the Romney campaign wasn’t going to touch them themselves. “Mitt Romney has delegated the crisis management of the Nugent problem to Ted Nugent,” O’Donnell noted, and then played the interview in which Nugent tries to explain how he would never threaten anyone, and went on to compare himself to a “black Jew at a Nazi-Klan rally.” “That guy knows something about damage control,” O’Donnell joked.

The damage control hadn’t silence those who were curious about how this Nugent/Romney thing began in the first place, though, and O’Donnell argued that this too bothered the campaign. “The only thing that seems to bother Romney is Nugent’s claim that Romney solicited Nugent’s endorsement,” he noted, adding the information that Nugent had endorsed Romney on March 2 and that now the “Romney campaign is calling Ted Nugent a liar” when a reporter had spoken to Ted Nugent and Nugent had said that, in fact, he had been approached by Romney.

“So tonight,” concluded O’Donnell, “America has a difficult choice: which one of these liars is lying about how one of the liars decided to endorse the other liar?”