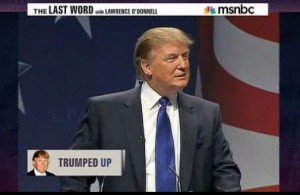 Why is Donald Trump so obsessed with the alleged mystery surrounding Barack Obama‘s birth certificate? To hear Lawrence O’Donnell and Jonathan Capehart, its about one thing: Trump’s obsession with the Obama’s legitimacy — as well as his larger dabbling with a still unlikely-seeming presidential run — is about one thing: driving ratings for his show Celebrity Apprentice. Shocker: the strategy appears to be working for what The Last Word calls “NBC’s biggest primetime star.”

Depending on to whom one listens, the controversy surrounding Obama’s birth certificate seems impossibly to be both real and imagined. The media figure who has most recently led the discussion on the side of it being a real controversy is none other than Trump, who has lately and adamantly questioned the validity of Obama’s presidency, calling it perhaps the “greatest scam in history.”

O’Donnell made his point by showing a chart that demonstrated the recently improved ratings of Celebrity Apprentice then suggested “as he gets crazier it goes straight up.” Capehart also noted that, in every appearance in which Trump has made to discuss his presidential run, he has specifically mentioned his reality show, giving credence to the notion that he’s only doing talking about the presidency to boost ratings. But something strange has happened during this so called promotional tour: recent polls indicate that Trump is doing remarkably well in both New Hampshire and Iowa, where in some case he finds himself in second place, just a few points behind leader Mitt Romney.

So even if Trump IS just trying to promote his NBC reality show, his birther rhetoric appears to be resonating with likely GOP primary voters. Cynical? Smart? Or just sad? Maybe all of the above.