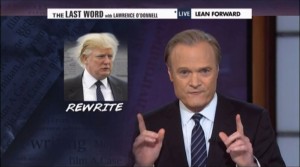 Lawrence O’Donnell and Donald Trump are locked in a good, old-fashioned Twitter feud. And by “good,” we mean “annoying.” And by “feud,” we might mean “a clearly-planned publicity stunt,” one devised to draw attention to O’Donnell’s show, which moved to its new 10 p.m. time slot on Monday. Trump and O’Donnell seem to be enjoying it; to everyone else, it’s a catty, embarrassing spectacle.

Let’s assume, for argument’s sake, that this isn’t a stunt, and that it’s just two grown men using a social networking tool popularized by teenagers to air out their differences. O’Donnell and Trump do have a bit of a cantankerous history — O’Donnell spent the better part of April exposing Trump’s presidential campaign as a fraud, predicting that Trump would bow out of the race on May 16, the day NBC would announce a new season of The Apprentice. He also referred to Trump as a fake billionaire, and implied that Trump needed the money from the show. On Tuesday, Trump tweeted that O’Donnell is killing the MSNBC brand with his low ratings and mocked him for predicting Tim Pawlenty would be the GOP nominee. This opened up a feverish bout of tweeting between them; insults were exchanged, Trump’s hair was discussed, and a nation of Twitter followers got to watch a businessman and a television host play the roles of 11 year-old girls. A week ago, Trump baited FOX’s Bob Beckel on Twitter in a similar manner. Beckel didn’t even dignify it with a response, on Twitter or TV. O’Donnell, on the other hand, took the opposite route, even dipping into teen lingo by replacing “you” with “u”:

What else did I predict? Something about u? Like the exact day u would reveal that u were not running. That was so easy.

Trump, in one of many replies:

If this already sounds like a couple junior high schoolers arguing, it gets better. O’Donnell took to the airwaves Tuesday night and spent six minutes telling his audience pretty much everything he had said about Trump since April. If you closed your eyes and sped up his voice, you might think you were listening to a teenager recounting the way Jenny told all the boys that Denise doesn’t shave her legs: “Then he said this, and so I said that, and then he said this, so I told him this and this!” What sticks out about this drama, however, is that both men work for NBC, and it can’t be a coincidence that Trump’s comments came just as O’Donnell was moving to a new time slot and sorely needed the attention. Sadly, this all seems to have worked, at least to a minor degree: Trump mocked O’Donnell yesterday for having just 57,000 Twitter followers. As of this morning, he was over 58,000, and climbing.

Enjoy the video of O’Donnell’s recounting of events below, courtesy of MSNBC: