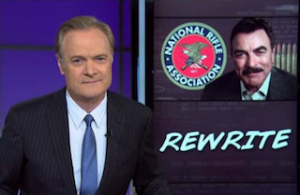 MSNBC’s Lawrence O’Donnell went all the way back to a 1999 episode of The Daily Show to gain inspiration for his “Rewrite” segment last night. The subject was Tom Selleck, who became the “poster boy” for the NRA by appearing in an ad for the organization just one month before the Columbine shooting in which he declared “I am the NRA.”

In another blast from the past, O’Donnell showed a clip from “the first O’Donnell-hosted national television show.” In a lengthy clip from The Rosie O’Donnell Show, Selleck defended the NRA from accusations that they were failing to protect children from guns. A partial transcript of their tense conversation follows:

Rosie O’Donnell: But you can’t say that guns don’t bear a responsibility. If the makers of the TEC-9 assault rifle… Why wouldn’t the NRA be against assault rifles? This is a gun that can shoot five bullets in a second. This is the gun that those boys brought into the school. Why the NRA wouldn’t say as a matter of compromise, “we agree, assault weapons are not good”?

Rosie O’Donnell: But you’re their spokesperson Tom, so you have to be responsible for what they say.

Rosie O’Donnell: But if you put your name out and say, “I, Tom Selleck…”

Tom Selleck: Don’t put words in my mouth. I’m not a spokesperson. Remember how calm you said you’d be? Now you’re questioning my humanity.

Rosie O’Donnell: No, not your humanity. I think you’re a very humane man…

After noting that 14 years later, Selleck is now on the board of the NRA, O’Donnell declared that “the time has come to do what Rosie O’Donnell refused to do 14 years ago–question Tom Selleck’s humanity.”

O’Donnell painstakingly listed the mass shootings that have occurred since Selleck first became associated with the NRA and eviscerated the actor for staying silent. “Tom Selleck, the man who for 14 years has given his full support as a spokesman and then as a board member to the industry lobbying group that has done everything it can every day to make sure that American mass murderers are the best equipped mass murderers in the world, that Tom Selleck has not had one word to say about what happened at Sandy Hook Elementary–and so yes, it is time to question Tom Selleck’s humanity.”

Coming to the conclusion that the only way Selleck can absolve himself would be to speak out publicly against the NRA, O’Donnell challenged him to “condemn what your organization has done this week in dragging two teenage girls into its propaganda campaign. If you do that, America will have the answer we’re all hoping for about your humanity. And if you don’t, then we will know who you really are. We will know that the clowns who wrote the words in that first ad you did for the NRA were absolutely right about you and said everything anyone will ever need to know about you in the last line of that ad. We’ll know that you, Tom Selleck, really are the NRA.”