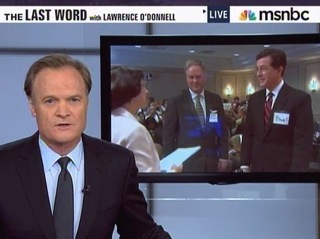 Today’s FEC ruling allowing Stephen Colbert not just to form a political action committee, but to promote it on his show may have some serious ramifications for how politics is done from here on out. On tonight’s Last Word, Lawrence O’Donnell explored what the possibility of being able to advertise a PAC on TV would mean, especially for political actors on networks like Fox News.

O’Donnell, like most people in the politics business, had one main question when first hearing about Colbert’s PAC: “is this a joke?” Colbert himself answered he did not believe political action and freedom of expression were jokes, and O’Donnell’s guest for the segment, Huffington Post‘s Alex Wagner, elaborated on that point: “the FEC ruled in his favor, and the FEC is a very serious body.” She also added that this liberated other TV political personalities to do the same, though O’Donnell noted that those in question, like Sarah Palin, already have PACs– the only difference here is that Colbert would be able to discuss and promote the PAC on his program. “All they said was today,” O’Donnell narrowed it down, “was if you discuss the PAC on your show, that will not be considered a contribution from Viacom– it doesn’t really change the landscape much.”

Wagner seemed to disagree somewhat, calling it a “disconcerting” and “disturbing trend in terms of money and influence,” in which people with mass platforms can donate significant amounts of money, though O’Donnell’s fears seemed far more tempered. In fact, O’Donnell was more concerned about how Colbert would handle himself now than the future– “what he’s really done for himself,” he joked, “is created a nightmarish bookkeeping task.”