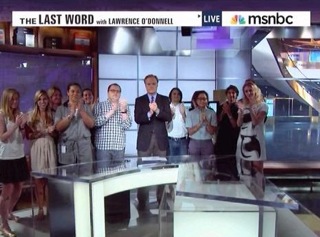 Lawrence O’Donnell has never been much of a fan of New Jersey Governor Chris Christie for myriad political reasons, but today he had to put that all aside. Noting that “Ann Coulter‘s favorite presidential candidate who isn’t running for president” could never get elected because he’s “a little too New Jersey” for Republican voters, he found a new reason why he’d never win a primary– one that won him the program’s first full staff standing ovation.

O’Donnell noted that Gov. Christie would likely never be president. “He won’t get it this time, of course, because he’s not running.” He won’t get it next time, he argued, because his attitude was too “New Jersey”– meaning abrasive and curt (but, we Jersey folk assume, in a good way, right?) He then showed a clip of him telling a constituent that where he sends his kids to school is “none of your business.” “That’s just a little too much New Jersey for polite Republican primary voters,” or, he added, “really anywhere outside of New Jersey.”

But the “New Jersey” attitude wasn’t the only nail in Christie’s political coffin. To O’Donnell, Gov. Christie’s statements calling fear of American-imposed Sharia Law “crazy” was just “way, way, way too reasonable in his defense of a Muslim judge he appointed.” “Being reasonable about just about anything,” he argued, “is the road to nowhere in Republican primaries.” Since “we know the guy cares about his political viability in the Republican party,” O’Donnell fully expected his answer to include at least one caveat to his opinion to keep him in the clear. It did not. The governor even admitted that some Muslim Americans were inappropriately detained after September 11th, something that, according to O’Donnell, “no Republican wants to admit ever happened.”

Coming from a Republican who, in O’Donnell’s view, had every political reason to feed the fear of Sharia Law that inhabits parts of the right, the answer to the press defending his new judge was extraordinary enough to merit him the first standing ovation of the program’s history– something O’Donnell later told Rachel Maddow he expects Gov. Christie not to earn again, but O’Donnell could not deny it this time.