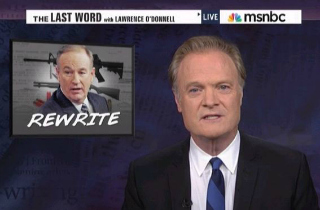 “Even when Bill O’Reilly is leaning in the right direction, he can still be so dumb it hurts,” was how Lawrence O’Donnell began his “Rewrite” segment Wednesday night. The liberal MSNBC host made the case that O’Reilly accused “the far left” of proposing stronger gun control in the wake of the Aurora theater shooting, all while advocating for stronger gun control himself.

On Tuesday evening, O’Reilly said that “the far left is trying to use the Colorado movie massacre to promote gun control,” which prompted O’Donnell to respond: “I guess that means me, although I’m personally more concerned with ammunition control than gun control — the guns being useless without ammunition.”

O’Donnell then pointed out that moments after O’Reilly made that comment, he advocated for a new law that requires the sale of all heavy weapons to be reported to the FBI. “So there’s Bill O’Reilly, proposing a new gun control law, two sentences after accusing the far left of trying to promote gun control. The truth is O’Reilly is actually smarter than this…. He knows exactly what he’s doing. He is a master manipulator of his audience.”

“O’reilly believes in more gun control. We know that now,” O’Donnell continued. “O’Reilly thinks the National Rifle Association position of unlimited guns and ammunition is unreasonable, but in order to present his gun control idea to his right-wing audience, he has to first of all talk about ‘far-left loons,’ so that O’Reilly can then sneak his little gun control idea into his show without sounding like a far-left loon to the far-right loons who watch his show.”