Lawrence O’Donnell: Gov. Rick Perry ‘Is Married To The Idea’ That Catholicism Is ‘A False Cult System’ 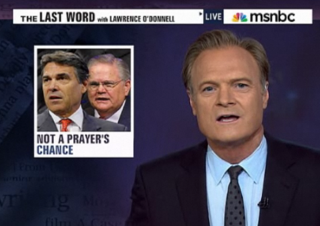 If the 2008 elections left one indelible mark in the way Presidential politics functions in this country, it is that opponents will forever attempt to link candidates to unsavory religious characters. On last night’s The Last Word, Lawrence O’Donnell didn’t have to look too far down the guest list to find in Texas Gov. Rick Perry‘s religious event “The Response” a controversial figure: Pastor John Hagee, most widely known for almost undoing the McCain-Palin campaign with his extreme religious rhetoric.

O’Donnell didn’t need to introduce Hagee as a new figure, but did give his audience a refresher course on what Hagee has said, including describing the Holocaust as God’s plan to get Jewish people back to Israel. “Because Rick Perry has invited Hagee to his prayer event, the idiotic governor of Texas now owns that Hagee quote. Rick Perry owns the idea that Hitler’s killing six million Jews was God’s idea,” O’Donnell affirmed, though he believed there were quotes in Hagee’s quiver that could do much more damage than that, if that’s even possible.

Noting that Hagee’s church– “which would better be labeled a theater”– was nondenominational and as such had no rules, O’Donnell turned to comments Hagee has made about the largest voting block in America: Catholics. Hagee has called Catholicism a “false cult system” and “godless theology of hate,” which O’Donnell reacted to nearly with laughter. “Catholics are the single largest voters in America,” he noted, “the Catholic vote has gone to the winner in every single presidential election since 1972.” And yet Gov. Perry, O’Donnell concludes, did not seem to mind inviting an anti-Catholic speaker to a religious event that had already done significant damage to a presidential candidate capable of winning the Republican nomination. “Rick Perry is now married to the idea,” O’Donnell noted, and vowed to “see to it” that people would know what his friend Hagee had been saying about Catholics should Gov. Perry throw his hat in the ring.

O’Donnell also invited Steve Krueger of the Catholic Democrats to comment on the matter, who could only say “The Response” was “exclusionary” and “for Gov. Perry not to have the sensitivity that this would not be well-received by Catholics puts into question his judgment,” particularly in the future with appointing judges.

That Hagee is back and relevant is only one bit of evidence that politics has its own circle of life, with every meme coming back eventually. Religious figures that function as kryptonite to presidential candidates seem never to veer too far out of the spotlight, meaning we’re long overdue for someone to uncover the Jeremiah Wright/Buddy Roemer connection.