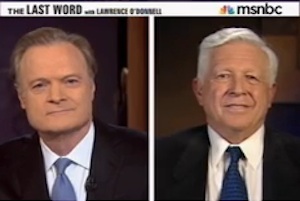 On MSNBC’s The Last Word, Lawrence O’Donnell took Rick Santorum-supporter and chief Super PAC contributor Foster Friess to task over his controversial birth control comments. “I love the expression,” Friess exclaimed. “It’s not so much what people say, it’s what people hear, and obviously a lot of people who are younger than 71 didn’t get the context of that joke.”

“Back in my days, they didn’t have the birth control pill, so to suggest that Bayer Aspirin could be a birth control was considered pretty ridiculous and quite funny. So I think that was the gist of that story, but what’s been nice, it gives an opportunity to really look at what this contraceptive issue is all about.”

Friess said that he wasn’t against contraceptives, only that the government shouldn’t mandate religious institutions to fund them.

“I have been blessed by contraceptives,” Friess continued. “It’s an important thing for many women. it’s allowed them to advance their careers and make their own choices. That’s what’s special about America. People can choose. That’s what’s so annoying about this idea that President Obama forcing people to do something that is against their religious beliefs and that’s what the issue’s about, where Rick Santorum, as I said earlier, you know what his position is, but yet he’s never had any attempts, in fact, has even funded contraceptives to fight aids in Africa.”

Earlier Thursday, Freiss had told MSNBC’s Andrea Mitchell that “Back in my days they used Bayer aspirin for contraceptives…The gals put it between their knees and it wasn’t that costly.”