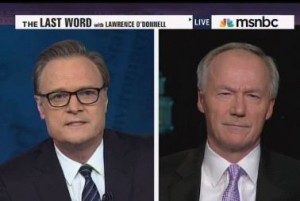 Lawrence O’Donnell confronted Asa Hutchinson, a former Republican congressman and head of the NRA-backed task force that released a series of recommendations today, over those very recommendations and the bias they come with. Hutchinson maintained that he is independent of the NRA, but O’Donnell repeatedly confronted Hutchinson on his ties to the NRA, the credibility of the report, and the actual efficacy of anything the report has to say.

Hutchinson started out by telling O’Donnell his lead-up to the interview was inaccurate and insisted that he is independent of the NRA. O’Donnell raised questions about the latter, citing Hutchinson’s high approval from the NRA during his congressional tenure and how no one on the task force had “any form of an education background” or experience working in schools. O’Donnell also called into question the financial ties of organizations represented by individuals on the task force.

O’Donnell even tried to get Hutchinson to say how much money the NRA is giving to him and the other members of the task force, but Hutchinson said “it’s none of your business.” O’Donnell countered with the following argument.

“If you’re submitting a report to be evaluated as an independent report, and you’re being paid by the people who you are giving the report to, the credibility of the report rests on a lot of things, including that payment relationship.”

Hutchinson deferred on the payment issue and instead moved to the content of the report. O’Donnell grilled Hutchinson on why the NRA has not made similar task forces on the security of children outside of schools, and on why the NRA does not support limits on magazine capacity. When Hutchinson insisted that more should be done to keep weapons out of the hands of criminals, O’Donnell interrupted and said they will get weapons anyway, so “what kind do you want them to have?”

O’Donnell argued with Hutchinson over the efficacy of armed guards at schools, calling the idea “very unrealistic” and having “a very limited capacity for success.” Hutchinson got interrupted yet again and got a little testy with O’Donnell over the interruptions.

O’Donnell concluded by attempting to get Hutchinson to condemn Wayne LaPierre for saying that an Obama 2012 victory will mean a greater loss for the country “than our nation has lost in any battle, anytime, anywhere.” Hutchinson brushed it aside and said “I don’t trust your recitation of his statements.” O’Donnell angrily insisted that he got the quote correct, but Hutchinson did not directly answer the question.

Watch below, courtesy of MSNBC: