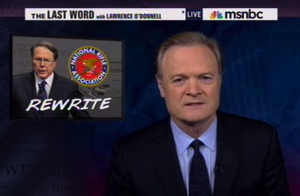 Lawrence O’Donnell tonight went after NRA executive vice president Wayne LaPierre for prioritizing the NRA’s agenda in the wake of mass shootings such as the one at a school in Connecticut last Friday. The NRA has announced a press conference this Friday after days of silence, but O’Donnell preemptively dismissed whatever justifications the pro-gun organization could give, declaring that guns “increase our risk of death” more than they keep people safe, declaring that LaPierre has blood on his hands.

RELATED: MSNBC Anchor Confronts GOP Lawmaker: Should We Just Send Kids To School ‘To Be Assassinated?’

O’Donnell first tore into the justification offered by LaPierre and others that crazy people don’t need gun to commit such horrible acts. He pointed out that on the day of the Sandy Hook shooting, a crazed man with a knife attacked 22 schoolchildren in China, but because he used a knife and not a gun, there were no fatalities. O’Donnell said that “there is only one way” for tragedies like this to happen: “mass murder by firearm.”

Another point O’Donnell made is that in direct contrast with the NRA’s pause before weighing in on the shooting and how quickly LaPierre responded to Bob Costas‘s comments about gun control a few weeks ago. O’Donnell called LaPierre a “professional liar” who knows when to stop talking. The media reaction to the shooting is so widespread, even the New York Post is taking a gun control position, with O’Donnell noting Rupert Murdoch‘s Australian roots in conjunction with successful gun control in Australia.

O’Donnell cited studies on gun violence in the United States to make the following point.

O’Donnell left some small hope of the NRA compromising on their position a little, but concluded that nothing that LaPierre and his ilk can say that “can wash the blood from their hands.”