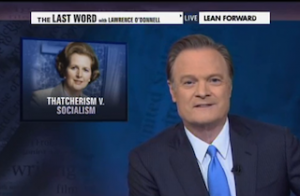 MSNBC’s Lawrence O’Donnell delivered an unexpectedly laudatory eulogy for Margaret Thatcher on The Last Word Monday night, but it was not one that many of her Republican admirers would appreciate. While conservative columnist George Will credited Thatcher for helping to “bury socialism as a doctrine of governance” in his tribute to the former British prime minister in The Washington Post, O’Donnell praised her for upholding the “good socialism” that still exists in Britain.

“What do you call a person who gets rid of bad socialism and keeps good socialism?” O’Donnell asked. “I call that person a good socialist, like Margaret Thatcher.” He then played a compendium of some of Thatcher’s most liberal public pronouncements, mostly having to do with Britain’s national health system and Social Security equivalent. As O’Donnell explained, these are essentially “socialist” programs that Thatcher fought to preserve despite her Reaganesque reputation.