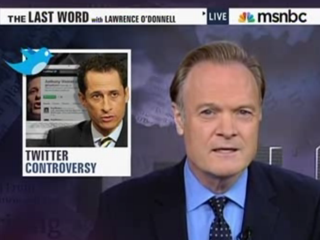 Lawrence O’Donnell may have missed the first official cable news day of “Weinergate” due to jury duty, but he made up for it tonight in spades. Showing the “puritanical” NBC version of the photo alleged to have been tweeted by Rep. Anthony Weiner, O’Donnell posited that there was likely a very good reason the Congressman did not want to deny it was him. In fact, “the longer I look at it,” O’Donnell confessed admiringly, “the more I don’t want to deny that that might be a picture of me.”

After mocking the official pixelation of the photo– which shows a cotton-clad aroused nether-region– O’Donnell noted that he only showed the pixelated version because it needed to “adhere to NBC’s puritanical standards,” clearly embracing the hilarity of the situation when removed from the sort of possible national security issues with hacking a Congressman’s Twitter account that have many on the right in panic mode. However, he did give his audience some direction, warning that the pixelation makes it seem “dirtier than it actually is”: “for those of you brave enough to take a peek at the contour of a human penis under cotton,” he directed them to the internet. Then he showed the picture for a period of time that felt slightly longer than necessary, only to later suggest that Rep. Weiner “might not want to deny that that is a picture of him,” delivering the above line and later giving a disclaimer for his own Twitter account: “some members of my staff have had access to it.”

After the humorous introduction, O’Donnell gets serious– looking back at a history of liberal politicians that have survived sex scandals because their constituents admired their work. O’Donnell notes that, as much as he mocks Newt Gingrich and other Republicans for their private misgivings, he only does it because of their hypocrisy. “Nothing should matter to you less than the legal sexual conduct of [a politician],” he concluded, adding that he believed Rep. Weiner’s career was safe “no matter what he tweets.”