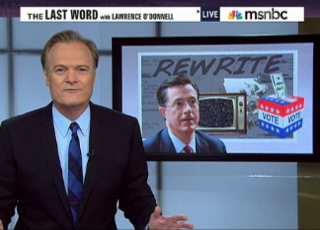 “Never trust a man in makeup,” Lawrence O’Donnell warned, noting that last night, he had trusted the least trustworthy man in makeup on television: Stephen Colbert, who is using his “dirty filthy campaign money,” O’Donnell posited, to lie about putting his “Rick Parry” ad on Iowa TV stations. “What respectable Iowa TV station would sell him time for that?” O’Donnell asked. Quite a few, it turns out.

O’Donnell noted that, the night before, he had played an ad from Colbert’s “Americans for a Better Tomorrow Tomorrow” SuperPAC endorsing Texas Governor “Rick Parry”, and seemed to regret the decision. Citing an email from the SuperPAC, he called it “beneath the dignity of the worst Nigerian spam scammer” and read some of its contents, which included threats that “there’s a spider” around, among other things. “This rank fearmongering is Colbert’s key fundraising technique,” O’Donnell noted, and yet, O’Donnell admitted he fell for it. He couldn’t possible believe the ad was actually airing in Iowa, the way Colbert claimed it was. “No Iowa TV station is going to accept this ad… Colbert was lying about buying Iowa time.”

So O’Donnell sent a producer to check on several Iowan TV stations to see whether it was true that the ad ran. And it was. Said a worker at one Iowa station, “Yeah, it ran during out 5 o’clock news hour yesterday.” But O’Donnell refused to claim that this one truth made Colbert trustworthy. “We here at The Last Word have now proven that Stephen Colbert has told the truth exactly once in his life,” he noted, not that this was a habit.

Then, he played the second ad to be released by ColbertPAC, falling for Colbert’s ruse yet again.