Lawrence O’Donnell is Wrong: The Charlie Sheen Show is Sick, Not Sad 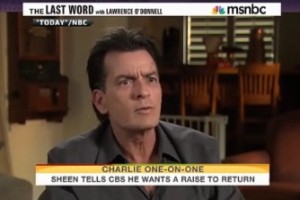 On Monday night, I watched my first, and hopefully last, Charlie Sheen trainwreck interview, courtesy of The Last Word host Lawrence O’Donnell. While O’Donnell laudably tried to focus the audience’s attention on the tragic undertow that threatens to pull Sheen under for good, I was overtaken, not by the spectacle of Sheen’s unraveling, but of the blithe interviewer pulling on the thread, and the voracious audience he serves. It didn’t make me sad, it made me angry.

When it comes to celebrities, we can be a heartless country, basking in their misfortunes like nude sunbathers at Schadenfreude Beach. The impulse is understandable, to some degree. It can be grating to listen to complaints from people who  enjoy privileges that most of us can’t even imagine. If you can’t muster up some compassion for Charlie Sheen, who makes more money for a day’s work than most of us will make in a decade’s time, I guess I can’t blame you.

Less understandable, but still within the norms of human nature, is the impulse to rubberneck, to slow down and check out the carnage of Charlie Sheen’s life as we pass it in the right lane of our everyday lives. To be honest, it can be tough for people to discern the difference between a run-of-the-mill attention whore, and an honest-to-goodness, circling the drain tragedy-to-be. On its own merits, a quote like “I Am On A Drug. It’s Called Charlie Sheen” is sheer genius, and we can’t all be expected to take the full measure of someone’s life every time we hear something funny.

But the people who are inviting Charlie Sheen to star in his own slo-mo snuff film don’t get a pass, and at a certain point, neither does their audience. It should be clear, to anyone who’s paying attention, that Charlie Sheen is in serious trouble, and that his next big exclusive could very well be with the LA County coroner. I disagree with Mediaite Managing Editor Colby Hall that interviewers like Piers Morgan are enabling Sheen, or even exploiting him. They’re not just pointing at Charlie Sheen’s self-immolation, they are throwing gasoline on it, and with Sheen’s distress as obvious as it is, making accomplices of the audience.

As it happens, I really like Charlie Sheen. I know it’s fashionable to snark about his TV show, but Sheen really is a gifted actor, and for those of you who think he owes his success to his famous father, I have two words for you, and one of them is “Emilio.” I don’t know if any man really deserves the kind of money that Sheen makes, but then again, if I had a nickel for every gag I laughed out loud at through two Hot Shots movies, I’d have a big-ass pile of nickels.

But even if you don’t care for Sheen, or you’re one of those people who can’t muster compassion for addicts who “bring things on themselves,” doesn’t decency at least dictate that you not make things worse?

Lawrence O’Donnell speaks knowingly about the trouble that Charlie Sheen is in, and with regard to Sheen’s current trajectory, he’s right, it is sad. But the interview he uses to illustrate that downward spiral is much more a symptom of our own sickness than Sheen’s: (from MSNBC)