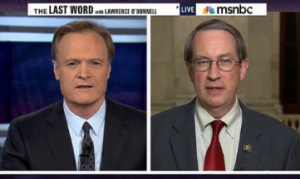 On MSNBC‘s The Last Word with Lawrence O’Donnell, Republican Congressman Bob Goodlatte showed up to proudly boast of his plan to lead a reading of the Constitution on the floor of the House of Representatives. O’Donnell, however, wasn’t as eager to congratulate Goodlatte on the idea as he was to establish that in the past Goodlatte wasn’t too concerned with basing his legislative proposals on specific constitutional authority.

The exchange got even more uncomfortable with O’Donnell angrily wondering:

O’Donnell: “You voted for an increase in something that you don’t even know has constitutional authority to exist?”

It seems Goodlatte demonstrated the best argument yet why it is a great idea to have every bill cite to its constitutional authority: without it he might continue to be unconcerned about which constitutional provision grants Congress the power to act or might not even know where to look for it. O’Donnell here was well researched and aggressive, yet still respectful during the interrogation, and emphatically made the point that a symbolic reading of the Constitution means much less than an adherence by members of Congress to its words.