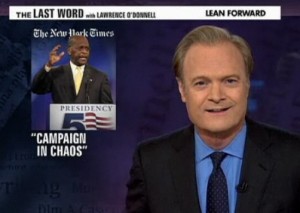 On Thursday night’s The Last Word, host Lawrence O’Donnell dove into reports of a chaotic Herman Cain campaign with gusto, particularly the revelation that an internal campaign memo instructed aides, when driving with the candidate, “Do not speak to him unless you are spoken to.”

O’Donnell joked that he had tried, unsuccessfully, to institute such a rule at MSNBC for a long time. Guest Joe Klein, though, probably had the line of the night, calling the Republican field “the most…glorious display of weird humanity I have ever seen.”

The segment was pegged to the least surprising campaign expose´ ever, from the New York Times, that revealed, through interviews with unnamed former Cain campaign aides, that the pizza king’s campaign is, like a calzone, a hotter mess inside than it is on the outside. The tidbit that’s getting all of the buzz, though, is this:

And then there was that e-mail to the staff about traveling in a car with Mr. Cain: “Do not speak to him unless you are spoken to,” the memo said.

O’Donnell gleefully ripped into Cain, and joked with panelist Alex Wagner, saying, “I want to thank you for being the only one here at MSNBC who observes my do not speak to him unless spoken to rule,” to which Wagner replied, “I know the rules, boss.”

This focus is so bizarre to me, because like Cain’s smoking ad, it’s like criticizing Hannibal Lecter for using the wrong fork while he’s eating your liver. In this case, it’s not even a valid criticism. Yes, the email does have a superficial “Do not taunt Happy Fun Ball” vibe to it, but really, it’s not that unreasonable a request. As a writer, I know how it is to have well-intentioned small talk invade your thought process, but unlike Cain, I’m not afraid to be a prick about it.

Time’s Joe Klein told O’Donnall that Cain’s time at the top of the polls is nearing an end, mainly citing the candidate’s weird abortion arc (I’m not so sure about this; even in polls taken since then, Cain retains his lead). Klein says Iowa voters reacted to Cain’s initial pro-choice-y position by telling Klein, essentially, that Cain “is dead to me forever.”

Klein is also the latest to predict a turn for Newt Gingrich, or possibly Rick Santorum, in the frontrunner’s barrel. “This republican field is the most glorious display of weird humanity I have ever seen on a debate platform,” Klein told O’Donnell, running down the other candidates’ disparate motives for running. “Newt, however, is a very clever guy. He has interesting ideas. I saw him turn a stump speech in to an endless lecture about brain science the other day. It was fascinating.”

Gingrich does have a shot at a ride at the top of the polls for a bit, but with barely 60 days to go before voting starts, he doesn’t have the resources to compete on the ground with a candidate like Mitt Romney. The big question is whether anyone, or anything, can wrest the race away from the logic-proof atomic fireball that is Herman Cain.