Chris Christie Too Fat To Be President | Lawrence O'Donnell
video

Lawrence O’Donnell Panel: Chris Christie Must Diet If He Wants To Run For President 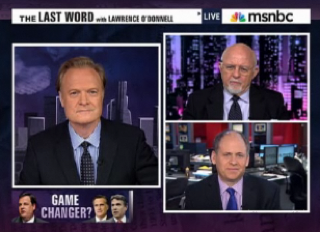 Now that it appears the media is finally over the hill on New Jersey Governor Chris Christie 2012 speculation, the focus on the governor has shifted to what would happen if he actually ran, and naturally the “is Chris Christie too fat?” question emerges front and center. On last night’s Last Word, Lawrence O’Donnell asked his panel– campaign strategist Ed Rollins and columnist Jonathan Alter— what the odds were of Christie making a presidential bid with his figure intact. The consensus? Expect a diet if a campaign was on the horizon.

O’Donnell noted that, should Christie have a legitimate interest in running in 2012, he had a bit of a problem on his hands: “he would have to tell the lie that he is ready to be president or explain why he was lying when he said [he wasn’t ready].” Should he jump that hurdle, however, he still had a serious image problem. Showing his panel an ad former New Jersey governor Jon Corzine aired accusing Christie of “throwing his weight around,” O’Donnell wondered whether that line of attack could be useful in a presidential run, and while that particular ad was unsuccessful, the panel did consider weight an issue.

Rollins, who had run the 2008 Mike Huckabee campaign, noted that “my last advice to my friend Mike Huckabee, who lost 100 pounds [before the election, was] he needs to lose forty pounds.” He added that Mississippi governor Haley Barbour had lost 35 pounds while considering a presidential run also, and that it was entirely common for contenders to do so. Alter agreed that it was important because of the rigor of a presidential campaign. “It’s a distance event; it’s a marathon.” He predicted that, should Christie run, he would “announce that he’s going on some sort of diet– like Oprah’s diet,” that would turn into something of an event to work in his favor.

RELATED: The View Dedicates Segment To Chris Christie: Too Fat To Be President?

As for his semi-moderate positions on things like gun control, the panel agreed that they were dangerous positions to take in a primary like the one Republicans are currently in. That said, Alter found the positions somewhat inevitable to find in a blue state Republican: “to survive in the Northeast as a Republican,” he argued, “you have to be fairly progressive on social issues.”