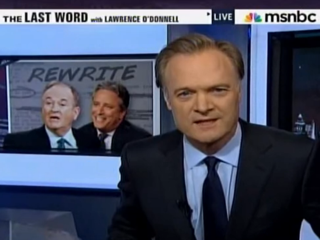 Ever since Donald Trump bowed out of the 2012 presidential race he was never in, Lawrence O’Donnell has been in quite the charitable mood to the right. Yesterday he stood up for the rights of the conservative-leaning Boston Herald, and today he lauds the courage of… Bill O’Reilly? Yes, it’s true: O’Donnell aired the results of the Fox News poll showing viewers thought Jon Stewart beat O’Reilly in their recent debate and noted O’Reilly had, too, proving he was “brave enough to admit that he lost.”

Because this is Lawrence O’Donnell, he did begin his “Rewrite” segment tonight talking about Donald Trump, and how the meeting between Stewart and O’Reilly to debate the presence of “the most non-controversial rapper in the history of rap,” Common, in the White House, had been negotiated “way back when Donald Trump was running for president.” He doesn’t really elaborate on the connection, but argues that once “Donald Trump ended his fake presidential campaign, nobody, not even Fox News viewers, cared anymore about Common.” To prove his thesis– well, the part about Fox News viewers, not so much the part about Trump– O’Donnell first played a lengthy clip from the interview, and then the results of what he called a “rigged” Fox News online poll.

The results were a landslide for Stewart, “the biggest shock in the history of Fox News,” O’Donnell quipped, and admitted that he would have to retract the word “rigged.” As as much as that was a positive development in O’Donnell’s eyes for the audience, he peeled off only a little bit of his characteristic description of O’Reilly as a “faux Irish tough guy”– he’s at least tough enough “to admit that he lost.” That said, O’Donnell made it clear that he wasn’t expecting lighting to strike twice– “something tells me we’d better not get used to that.”

A departure from the typical blustery derision O’Donnell tends to reserve exclusively for O’Reilly? Yes, but, as likely to return as O’Donnell thinks O’Reilly’s admission of being wrong would be, one imagines, and we’re still waiting to hear what Donald Trump had to do with any of this.