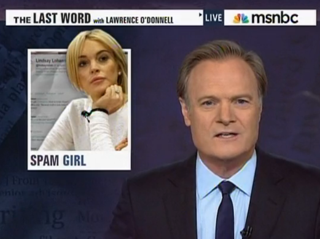 Lindsay Lohan somehow found herself generating cable news fodder today when she tweeted she was concerned about the Federal Reserve. Unfortunately for those who agreed with what they thought was a sincere political statement, that tweet was an advertisement. On The Last Word tonight, Lawrence O’Donnell and guest Dana Milbank explained how the youngest man ever accused of securities fraud got his hands on Lindsay Lohan’s Twitter.

O’Donnell explained how the tweet got there– it was paid for by the National Inflation Association, a group that “pumps up tiny unknown stocks that deal with gold and silver.” Lohan has been tweeting out advertisements to support herself, though this one may be the first with such overt political overtones. Among those behind the National Inflation Association, O’Donnell explained hilariously, was the “youngest person in the nation’s history to be accused of securities fraud when he was all of 16.”

O’Donnell had Milbank on to give some insight into the world of paid celebrity tweets, who revealed that, while Lohan does make money on Twitter, she still is “not as good as Kim Kardashian” at getting paid for. He also estimated that, should he need it, O’Donnell would probably rake in about $50 a tweet if he sold them, “perhaps a premium because you don’t wear an ankle bracelet,” and noted that Lohan had tweeted many other advertisements– just not one about the Federal Reserve before. Whether this revelation will deter Lohan from publishing political tweets (unlikely if she needs the money) or make them less newsworthy is yet to be determined, but it appears that, alas, she may not in earnest be joining the Ron Paul Revolution anytime soon.