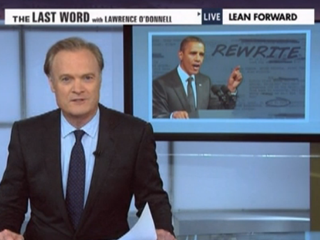 On last night’s The Last Word, Lawrence O’Donnell spent an entire segment explaining what the Antichrist is, and how the image of the Antichrist hurts President Obama’s reelection chances. It wasn’t the most bizarre segment he’s ever done, but it did generate some question marks, so tonight O’Donnell explained why such a segment was important– namely, because people actually believe the President could be the Antichrist, and are going to his events to yell it out at him.

Beginning the segment with the video of that heckler, who attended an Obama fundraiser to yell “you are the Antichrist!” at the President. “That happened less than an hour after we had a discussion on this program about people who believe that President Obama was the Antichrist,” O’Donnell noted. He used it as a launchpad to explain precisely why he had aired a segment on the matter– because people believed such a thing, and while O’Donnell noted that the emergence of the Antichrist should make believers “kind of happy” to know the end is near, “they are certainly in no mood to vote for the Antichrist.”

The actual Antichrist situation was marginal to O’Donnell’s point, however, which was that many Americans believed hopelessly ignorant things and were swaying the nation’s politics based on them. For example, O’Donnell cited a study that showed 12% of Americans think the President is Muslim, and 25% think he was born in another country, despite the release of the President’s birth certificate. But, O’Donnell argued, “the resistance to fact is not evenly distributed,” and is more prominent in the South and among Republicans. Fundamentally, he concluded, “too much of the Republican opposition is not really opposition to President Obama’s policies, but to the man himself,” whether he be Muslim or foreign or of Antichrist nature.