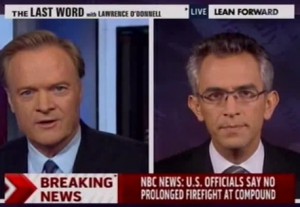 As details continue to emerge (and shift) about the shooting of Osama bin Laden, the apparent contradictions threaten to undercut the wave of euphoria that the terrorist leader’s demise sparked on Sunday. On Wednesday night’s The Last Word, host Lawrence O’Donnell spoke with MSNBC’s Richard Wolffe about one such contradiction, the recent report that bin Laden wasn’t armed, but “appeared to lunge for a weapon.” O’Donnell observed that this was “The classic line that appears in every police report of every questionable shooting” of an unarmed suspect by police. Oddly, O’Donnell lets the suggestion dangle, as he and Wolffe go on to discuss the inconsistent stories that have been rolling out about the shooting.

While O’Donnell was probably just noting an ironic similarity, it is worth noting that most police shootings of unarmed suspects don’t involve a guy who has killed thousands, and is as likely to have several blocks of Semtex under his jammies as some Vicks Vap-o-rub. It is entirely proper for journalists to dig for the truth, but just as important not to obscure it by omitting important context. Given who bin Laden was, what he was capable of, it is hard to imagine any provocation too small to take him out.

Fair enough, two or three days is a short time in which to nail down every detail of such a monumental operation. However, the administration has also been caught flat-footed on questions that should have been settled before bin Laden ever began to crap his pants for the last time. As I’ve noted previously, there’s no excuse for the muddy messaging on whether waterboarding was used to gain intel on the bin Laden kill, but even more baffling is the suspense-filled deliberation over whether to release photos of the remains, finally decided today.

That should have been decided earlier, and easier, than whether and when to use a ground assault. For what it’s worth, and I hate like hell to even kind of agree with Sarah Palin on this, I think the photos should be released. Not because of any “pussy-footing” taunts or chest-thumping “deterrent” (although there is a case to be made that such a physical symbol of defeat could actually save lives by demoralizing the enemy), but because the reasons to do so outweigh, in importance, the reasons being given not to.

This is America, a free country with a free press, and whatever was gained by bin Laden’s killing was paid for by all of us. I agree that we ought not display it as a trophy, but those of us who feel the need to see it, to close the wound a little more, perhaps, or even for a flash of well-earned, wicked glee, or for reasons held too closely to convey, we ought to be free to do so. To deny us that, essentially to avoid pissing off some terrorists, is to grant the villain victory from beyond the grave.