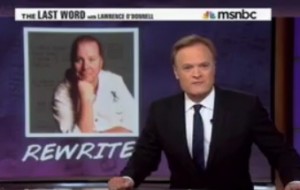 O’Donnell lovingly pointed out that Batali doesn’t just talk the talk when it comes to feeding the poor, and wondered if Gutfeld would “want to slap around” Jesus for feeding the 50,000.

Gutfeld and his snickering crew of insomniac heroes lit into Batali for trying to raise awareness about hunger by having he and his family live on a food stamp budget for a week, about $1.48 per meal. Gutfeld asked “Does this make you want to slap him around?”

Red Eye panelist Jamie Weinstein suggested Batali “do what he does well, which is start successful restaurants and hire people” if he wants to get people out of poverty.

“You have to be so disconnected from American popular culture,” O’Donnell began, “not to know that Mario Batali has started many successful restaurants, and hired hundreds and hundreds, maybe thousands of people to staff those restaurants. He has 11 restaurants from New York to Los Angeles. He also runs Eataly, a large combination of markets and restaurants under a single roof here in new york. and he’s also created jobs in the television business by his own very successful tv show, The Chew, on ABC.”

“It’s illegal in most states to use food stamps in restaurants,” Lawrence said, “and as to donating some food — Mario Batali has donated more food than any other chef in america and probably the world.”

He went on to list the many ways Chef Batali works to combat hunger, including The Mario Batali Foundation. “Kind of makes you wonder what the Greg Gutfeld Foundation has done lately,” Lawrence said.

On that count, Gutfeld did feature a recurring segment on the show during the first half of 2011 in which he auctioned off his drawings for charity, with the added benefit of mocking other celebrities’ charity work by telling viewers “It’s not about charity, it’s about me being awesome.”

“It might be time for them to reread what Christ did with the loaves and fishes,” O’Donnell continued, “and when they are reminded that he gave all the bread and all the fish away to the poor, will Greg Gutfeld say this?”

He then played a loop of Gutfeld asking “Does this make you want to slap him around?”

I used that very example from the Bible yesterday morning to make a point about conservatives, but it works even better on Libertarians, who are just liberals who want permission to be greedy, or conservatives who want permission to smoke pot and screw. Gutfeld, however, is a self-described atheist/agnostic, so Jesus would probably have a hard time getting his vote anyway.

Ordinarily, I would defend a comedian’s right not to do any research (all that really matters is the funny), but this bit was so clearly reverse-engineered to ideology that the comic’s exemption doesn’t really apply. I will say this in Gutfeld’s defense: I spent a few hours drinking and talking with him at CPAC a few years back, and he is a nice guy, he’s funny, and in person, not nearly as strident or rigid. The comic mercilessness that is his show’s signature required him to either mock Batali, or ignore him.

Where a lot of privilege-protective conservatives fall short is in the ability to recognize their own privileges as privileges. They view Barack Obama as a villain for providing a safety net to people who would go hungry without it, and those hungry people as villains (at least the black ones), yet they want to elect a guy who goes around bragging about starting a business whose average pay would keep families eligible for food stamps. More people for Greg to slap around, I guess.

Update: As some readers have pointed out, the miracle I referenced is described in the Bible as having fed “about five thousand men, beside women and children.”

I don’t think it’s unreasonable to assume that each of those men had a wife and eight children (they didn’t have the pill back then, right?), but to the extent that 50,000 was an error, it was mine, not Lawrence’s. To those who quibble, I say, “Why do you hate women and children?”

Also, this post has been edited to identify Jamie Weinstein, and to offer a fuller version of the quote that’s in the clip.