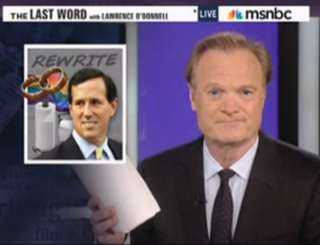 To Rick Santorum, gay and straight marriage are as different as paper towels and napkins, according to an analogy he employed at a campaign stop in Iowa. In his “Rewrite” segment tonight, Lawrence O’Donnell found this comparison to be “the American politician at his worst,” trying to relate to real Americans who probably, like O’Donnell, use napkins and paper towels interchangeably all the time.

The context for this extensive close reading of Santorum’s somewhat confusing analogy is the Fox News Republican debate on Thursday night, in which Santorum will participate, but not gay Republican candidate Fred Karger, despite the former polling 50% lower than the latter. O’Donnell notes that Karger is neck in neck with another candidate that will attend the debate, Tim Pawlenty, but argues that “Fox News knows that Fred Karger is openly gay, and Fox News is not about to allow an openly gay candidate in a Republican debate.”

Instead they will have Santorum, who O’Donnell abstained for attacking for his views on the LGBT community as much as for what O’Donnell clearly perceived as a ludicrous and inconvenient distinction between napkins and paper towels. Explaining to a crowd his stance on gay marriage, Santorum argued, holding up a napkin, that that napkin will never be a paper towel no matter how much he calls it that– similarly, he concluded, same-sex marriages would never be “real” marriages despite having the name.

Suggesting that Santorum is “not openly gay, but he is deeply confused by human sexuality,” O’Donnell then went into an explanation of his personal relationships with both napkins and paper towels. “I can’t remember the last time I bought napkins,” he noted, joking that “only a politician could think there is some big difference between a napkin and a paper towel.” “The paper towel is the napkin of choice at my home,” he continued, but also relayed an anecdote of the last time he used napkins– napkins he procured from Starbucks, to clean up a spill the way a paper towel would. “Someone who has no comprehension of the American relationship to paper towels and napkins,” he concluded, has as much of a chance of winning a presidential election as “an openly gay Republican.”

O’Donnell then let the clip run to see “where Santorum takes this”– he argued that polygamy and incest could not make a marriage any more than a same-sex couple could. For this he accused Santorum not just of ignoring much of the Bible, where polygamy was common, but of attempting to turn the audience against the two Mormon candidates he is running against– Mitt Romney and Jon Huntsman.