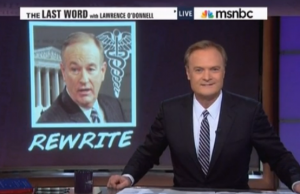 First Lawrence O’Donnell was unhappy with Bill O’Reilly for his not apologizing, as promised, for incorrectly predicting the Supreme Court would strike down the Affordable Care Act’s individual mandate. On Tuesday night, O’Donnell was still unhappy with O’Reilly despite — and because of — his delivering the awaited apology.

In his apology on Monday night, O’Reilly noted his promise and went on to say he was sorry for not taking into the account the taxation argument.

So O’Reilly apologized, O’Donnell told us…”or did he?” He then played the first part of said apology, focusing on O’Reilly’s saying, “Truthfully, I never in a million years would thought the chief justice would go beyond the scope of the commerce clause to date and into taxation.” In a million years? “How about in the last three years,” O’Donnell remarked. He went on:

In the last three years O’Reilly could have heard me explain how the individual mandate’s claim of constitutionality resides not in the commerce clause, but exclusively in the power to tax. I said it many times. […] That’s why LBJ and the Democrats created a separate Medicare tax to fund Medicare when they created the program in 1965, so that it’s constitutionality would also be firmly grounded in the power to tax, just like Social Security. If what Bill O’Reilly just said is true — which is a very big if, it’s O’Reilly we’re talking about here — but if it’s true, it means, one, my feelings are hurt that Bill doesn’t watch this show. And two, Bill is just as horribly informed and uninformed about current events as his Fox News audience is.

So naturally this is not just about O’Reilly, but circles back to O’Donnell. But he digressed, then criticizing the second part of O’Reilly’s apology. Namely, O’Reilly’s saying, ” I may be an idiot for not considering that.” He may be an idiot? Alas, O’Donnell reminded us, his promise didn’t include the word “may” — and to top it off, O’Reilly later said, “I’m not really sorry.”

O’Donnell’s pettiness was all too apparent in a segment remarkably lacking self-awareness. O’Reilly wasn’t particularly enthusiastic, but he acknowledged his promise and followed up. His apology may not have gone far enough for everyone, but it’s time to move on, lest we forget there are more consequential, relevant debates to be had.