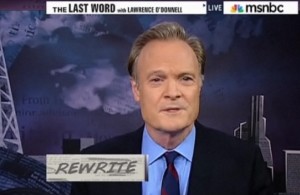 On Tuesday night’s Last Word, host Lawrence O’Donnell used his “Rewrite” segment to lambaste Kansas State Rep. Virgil Peck (R-Tyro) for remarks he made Monday on the floor of the Kansas legislature. Discussing the state’s method of controlling the feral pig population by shooting them from helicopters, Peck suggested this would be a good solution to “our illegal immigration problem.”

O’Donnell took Peck to task for the remarks, refusing to accept his apology, and turning the entire episode into a treatise on “pro-life” hypocrisy.

Peck’s apology, admittedly meager, wasn’t actually offered to O’Donnell, or to the would-be victims of Peck’s imaginary Apocalypse Now remake, but simply to his legislative colleagues:

State Rep. Virgil Peck of Tyro distributed a statement on the House floor Tuesday in which he said his statements were unfortunate, The Kansas City (Mo.) Star reported.

“My statements were regrettable. Please accept my apology,” Peck said in the signed one-page statement.

With his dudgeon dial set to “11,” O’Donnell went at Peck like Cujo’s irritable half-brother, zeroing in on the hypocrisy of a Christian, “pro-life” politician advocating the murder of the post-born:

O’Donnell’s outrage seems justified, but his conclusion misses the point, equating the sin of dehumanizing illegal immigrants with the notion of humanizing fetuses. Does that mean that, if Peck was pro-choice, his position on shooting illegal immigrants from helicopters would be consistent? Advocating the murder of fleeing, unarmed people is bad enough without trying to ladle on a hypocrisy charge, as well.

Conservative watchdog Newsbusters also misplaces its outrage, blasting O’Donnell for “libel(ing) good Christians” as immigrant killers. The “good Christian Kansas sharpshooters” that O’Donnell references are in the mind of Virgil Peck, and he does so in order to point out that killing fleeing women and children is not the Christian thing to do. Either way, how is that worse than wanting to strafe fleeing f’erners from a helicopter?

I think O’Donnell deserves a mild pat on the back for resisting the urge to throw in a Sarah Palin helicopter-hunting joke, and we can all be grateful that Peck has nothing, whatsoever, to do with the preschool “Head Start” program.