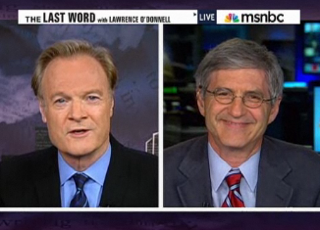 O’Donnell discussed the matter with NBC News’ Michael Isikoff, who tried his best to give bin Laden the benefit of the doubt, but didn’t get too far. “We don’t know if those are bin Laden’s videos,” he began, before being interrupted by O’Donnell exclaiming “Oh yes, we do!” and adding, “it is the official position of this show from this point forward that that is Osama’s stuff.” He had already began the segment expressing “shock and amazement” that bin Laden would collect porn, and couldn’t help but laugh at the delivery of his official stance. Isikoff added context that only added mockery to the matter: fundamentalist elements like bin Laden had been so consumed with sharing pornography that American intelligence “suspected that coded messages were being sent through pornographic pictures being sent through the internet.”