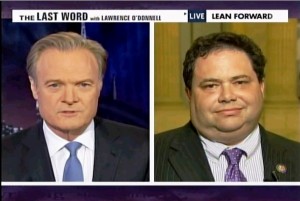 On The Last Word this evening, host Lawrence O’Donnell spoke with Texas Representative and Tea Party movement member Blake Farenthold to discuss the possibility of a “government shutdown.”

Farenthold told O’Donnell that “Everybody on the Republican side is working to avoid it. Nobody wins in a government shutdown. I think we’re going to avoid it.” When asked whether he would vote for a package to avoid a possible shutdown this Friday, Farenthold replied that it “depends what all is in it,” adding that he would need to be able to “bring something back” to his constituents if he’d settled for less than he’d wanted.

O’Donnell pointed out that many Americans would want to avoid a shutdown… so why the need to explain why it was avoided? Farenthold responded that those who voted for him were promised spending cuts and new jobs. He added that Democrats are to blame for failing to pass a budget last year… and failing to “act like adults.”

And, then, there is far and away our favorite Farenthold quote of the evening, in response to the fact that Speaker John Boehner is paying no mind to a bill that would effectively cease payment for members of Congress and the Senate should there in fact be a shutdown:

It’s worthless. It’s unconstitutional. 27th Amendment! …I think that’s because we in the House realized that the Constitution says you can’t change the compensation of a Congressperson without an intervening election. It’s plain, simple English in the 27th Amendment. Google it!

In His Own Words

Watch the clip, via MSNBC: