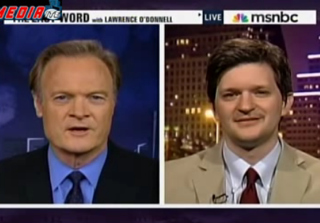 Karl Rove and Sarah Palin don’t exactly have a reputation for being best buddies within the Republican Party, and Rove is doing little to damper than image in his latest interview with New York Magazine, debuting his Palin impression and mocking her reality TV career. Lawrence O’Donnell invited NY Mag‘s Joe Hagan on the show today to talk about Rove’s impressions, his 2012 picks, and what this rift means for the Republican Party.

Introducing the segment by describing the interview with “Fox News comedian” Rove, O’Donnell gave his Karl-Rove-as-Sarah-Palin impression about three seconds before giving up and reading the excerpt, in which Rove mocks a hypothetical President Palin as whining, “Holy crap! Putin said something ugly!” Hagan added some color to the text by describing the moment in which Rove made said impression in person. “The disgust in his voice is naked,” he told O’Donnell, adding that it was not particularly surprising to hear him do impressions and that Rove actually has a reputation for them among his friends.

So why the disdain? Hagan argues that, as an old guard Republican, “it’s not in his interest to see her succeed,” as she represents a wing of the Republican Party that split into the Tea Party, people who “used to be the base but they [the old guard] don’t have as much control [over them] as they used to.” Rove, O’Donnell adds, doesn’t appear to believe that politics is volatile enough for macro-patterns to change quickly in a way that would make Palin a successful candidate. On that note, O’Donnell asks Hagan if he got a sense of what candidates Rove would back given a chance, the latter answered that Rove would “be extremely happy” with former Florida governor Jeb Bush, but barring that unlikely scenario, he would also support Indiana governor Mitch Daniels.