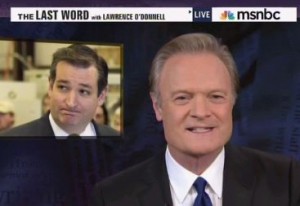 Senator Ted Cruz got a lot of negative press for his interrogating now-Defense Secretary Chuck Hagel over ties to possible anti-American groups, which drew parallels in the media between the Texas Republican and the infamous communist hater Joe McCarthy. Lawrence O’Donnell took on this controversy in his show tonight, and the part that amazed him the most was how when directly asked if McCarthy is someone he personally admires, he declined to answer the question. O’Donnell practically yelled at the screen that the only acceptable answer to that question is a clear NO.

After amusedly pointing out the physical resemblance between McCarthy and Cruz, O’Donnell reminded viewers of how Cruz once alleged that there were a dozen communist sympathizers in the Harvard Law faculty while he attended. And despite being repeatedly asked about it, Cruz has not given any more information or provided specific names, leading O’Donnell to conclude “they do not exist.”

There is mud-slinging and smearing all the time in politics, but O’Donnell singled out Cruz for being “so perfectly and childly McCarthyesque.” And in an interview with The Dallas Morning News, when Cruz was asked if he admires McCarthy, he answered, “I’m not going to engage in the back and forth and the attacks.”

O’Donnell marveled at how Cruz could not bring himself to simply deny that he admires McCarthy, whom O’Donnell called a “lying alcoholic” and to which he concluded that maybe Cruz doesn’t necessarily mind the McCarthy comparisons in the press.