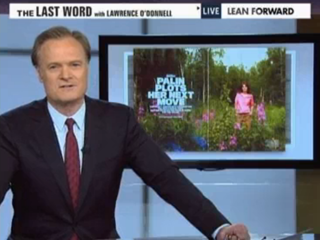 Lawrence O’Donnell has made a bit of a sub-segment on his program of playing Duck Hunt with what he considered ridiculous presidential threats from sure losers. He first shot down, repeated, the potential Republican presidential bid of Donald Trump, and now that Sarah Palin is “echoing Donald Trump’s looney mantra of ‘I can win,'” O’Donnell is out to make mincemeat of that prospect, too.

The main recipient of O’Donnell’s ire today was not particularly Palin, but Newsweek, for putting Palin on the cover and “allowing Palin to say ‘I think I can win’ without discomfiting her in any way.” The “ discomfit” O’Donnell wanted to see comes in the form of almost every 2012 presidential poll, which O’Donnell noted show “she’s the most unpopular politician in America” and, beyond that, “the most unpopular politician in Alaska.” He notes that only one approval rating appears in the piece– her 80% pre-John McCain approval rating.

In attacking Newsweek, O’Donnell even went out of his way to compliment Palin in a way she rarely hears from his side of the aisle: “She knows she’s lying when she says ‘I can win’– she’s smart enough to know.” “Newsweek does everything to make the madness of Sarah Palin sound reasonable,” he notes, ripping through sentence after sentence of what he called “the softest treatment the Lamestream Media ever has [given her].” He went on to attack its “pathetic pro-Palin tilt” and “utterly absurdist” conclusions, and conclude that Newsweek negotiated a deal with Palin to put her on the front page in exchange for access, which they feared they could lose if Palin didn’t “trust” them.