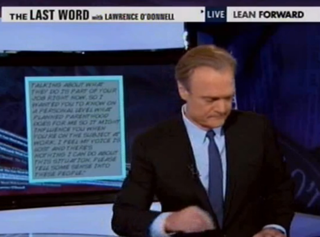 A century from now, children in social studies classes will look at the news reports of this decade and define our generation by how many news people appeared to constantly be on the verge of tears on television. Last night it was Lawrence O’Donnell‘s turn, who admitted that, although he had little experience with Planned Parenthood, he had friends who would be severely hurt by the organization’s defunding.

O’Donnell began his nightly “Rewrite” section admitting that Planned Parenthood has little impact to his personal life, but that this did not immunize him to understand the importance of the organization’s work with others. He then pulled out his phone and began to read an email from an unidentified female, “an unemployed victim of the Great Recession who can’t even watch cable TV.” After introducing the writer, O’Donnell read the letter in its entirety, which not only highlighted Planned Parenthood’s birth control services– which helped the writer obtain medication of market value close to $100 a bottle– but their health services, too. The writer explained that, suffering from regular cysts, the organization gave her her only opportunity to visit a doctor and have her breasts routinely checked for malignant cysts. What’s more, having lost her health insurance, she had not seen a non-Planned Parenthood doctor in a long time, and she did not have an alternative to Planned Parenthood should their services concluded.

Towards the end of the letter, O’Donnell’s voice cracked, and he dramatically turned his head to the side (think Alabama gubernatoral candidate Tim James) as he cut to commercial. He may have been making a point he very strongly believed in, but it ultimately came off as contrived. Then again, that isn’t entirely his fault– we are television viewers in the Glenn Beck era of news. Our current Speaker of the House appears to be seconds away from an emotional breakdown every time a camera comes within two yards of him. For those who were brought up on news a generation or two before– when only events like a presidential assassination could reduce a journalist to tears– it may have appeared more sincere than for the rest of viewers who can barely consider a news program a news program if there isn’t a man on it crying (women crying, of course, is unprofessional, wimpy, and simply passé). Even two years ago audiences were raving about Keith Olbermann‘s passionate anti-Prop 8 Special Comment; in light of new journalistic melodramatic sensibilities, the last of the Special Comments were rendered punchlines on arrival. O’Donnell’s take on that aesthetic– reading an email off a Blackberry and then crying to commercial– feels as outdated as it does contrived, particular on a topic of as moderate importance as Planned Parenthood’s federal funding.