Lawrence O’Donnell To Obama: ‘The Boston Herald Doesn’t Like You. Get Used To It’ 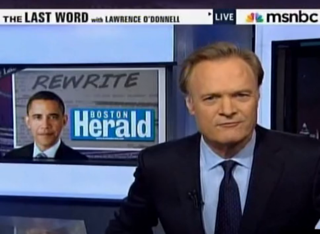 Lawrence O’Donnell spends a substantial amount of time bashing assorted groups of conservatives, so it’s usually quite the exciting occasion when he turns his guns on the Obama administration. Today he came out, strangely enough, in defense of the conservative-leaning Boston Herald and the free press in general, the former of which were barred from a White House event in Boston for being biased… like, O’Donnell argues, every other newspaper in America.

The reason White House spokesman Matt Lehrich gave for barring the historically right-leaning newspaper was their insufficient fairness– Herald editors say it is specifically due to a front-page column written by Mitt Romney against the President. O’Donnell first parsed the White House statement (“good luck trying to diagram that sentence,” he quipped of Lehrich’s claim that he tends “to consider the degree to which papers have demonstrated to covering the White House regularly and fairly in determining local pool reporters”) and then turned to the matter at hand. “Ok White House, let’s get something straight here: the Boston Herald is not unbiased,” O’Donnell ceded, though immediately adding that it’s left-leaning counterpart, the Boston Globe, wasn’t either. “The New York Times is not unbiased,” he continued; “The Washington Post is not unbiased.” He then broke it down further, just in case the White House missed the point: “The Boston Globe… likes you guys. The Boston Herald doesn’t like you. Get used to it.”

So then why defend the Herald despite what O’Donnell argued was their obvious bias? “The Herald can do you no harm,” he told the White House, noting that Massachusetts was not exactly a swing state, nor had any previous work by the newspaper seemed to have caused a dent in the dark blue armor of the states’ Democratic tradition. But the strongest point O’Donnell made, though not directly stating it, is that a bias does not delegitimize a publication. Massachusetts voters, who overwhelmingly voted for President Obama, he argued “deserve to read first hand accounts of Obama events as seen through the biased eyes of Boston Herald reporters and editors.” While he did not flesh that argument out too much further– he instead noted, showing off a memory of what the Herald had written only a local could muster, that Romney’s column was comparatively mild– it leads to conclusions: the Herald’s bias doesn’t make it a fraud of a newspaper, and even if it did, Bostonians can (and routinely have) overcome that publication’s bias by expressly voting against it.

Defending right-wing bias is certainly new territory for O’Donnell– one must wonder if O’Donnell would defend Fox News with the same zeal if it were barred from, say, the White House press room– and it suits him. Sure, O’Donnell has a stake in defending opinion journalism, but he also has no ideological predisposition towards criticizing the White House, which give his implication that the Obama administration needs to grow a spine more persuasive power than if, say, Sean Hannity said it. At the very least, it may mean the White House will pay his criticisms more mind.