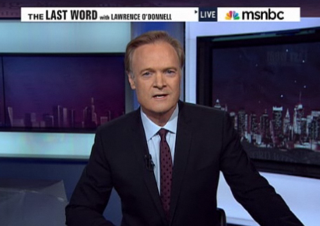 The mood during the 8PM hour on MSNBC tonight– occupied by a show other than Countdown for the first time in eight years– was somber and respectful, as host Lawrence O’Donnell took some time to thank his predecessor Keith Olbermann for building the program before him, and for what he “invented and taught us to do: op-ed TV.”

O’Donnell took some time from The Last Word tonight to describe in detail his nervous the minutes before going on air to host Countdown for the first time as a substitute. “There was no way of occupying Keith’s anchor desk without seeming smaller, much smaller,” he relayed, noting that it was one of the first times he felt nervous– he felt many, many adjectives on television, but “never nervous.” He thanks the audience for not turning away from the program that night, and, individually, many of the staff members that kept the ship afloat while Olbermann was gone. Then he turned to the man himself–  “consider what Keith invented and taught us to do: op-ed TV.”

O’Donnell then compared Countdown to two different forms of media to attempt to explain the magnitude of the show’s success in his eyes: the newspaper op-ed, and the fictional television series (specifically, The West Wing). Olbermann wrote “5 op-eds a week, each much longer than the standard 800 words,” he explained, laughing at how ludicrous the idea of asking a newspaper columnist to produce the same. Then he took to the time the show was on the air: “this is the only place in television where people are surprised if you leave after eight years.”

“We have no idea how he did it– none of us do,” O’Donnell admitted, noting Olbermann “took MSNBC to new heights,” and finally giving him thanks from both him and his mother for the platform, without which he would otherwise be watching “The Real Housewives Of Something.”

O’Donnell’s goodbye to Olbermann via MSNBC below: