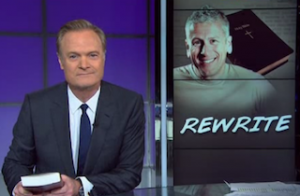 Rather than search for a replacement for Pastor Louie Giglio, who was forced to withdraw from reciting the benediction at President Obama’s upcoming inauguration, Lawrence O’Donnell has another idea: remove the Bible altogether.

Giglio’s statments about the “aggressive homosexual movement,” uncovered by ThinkProgress, were so abhorrent and inconsistent with the president’s views, that Giglio stepped aside on his own before the inauguration committee could ask him to leave.

After reviewing some of Giglio’s offensive language, O’Donnell turned his attention to the statement released by the Presidential Inaugural Committee, who said they were “not aware” of the Pastor’s comments when they selected him. And “as we now work to select someone to deliver the benediction, we will ensure their beliefs reflect this administration’s vision of inclusion and acceptance for all Americans.”

O’Donnell found this new search to be a tricky task for the committee, re-framing it as, “In other words, we will ensure that whoever delivers the benediction rejects the same parts of the Bible that President Obama rejects and most Democrats reject, even though every word of the Bible is the word of God.”

Citing examples such as “burning prostitutes at the stake,” O’Donnell went on to posit that there is no one left on earth who truly agrees with everything in the Bible. “Still, the president, following one of our most absurdest traditions in the government that invented the separation of church and state, will put his hand on this book filled with things he does not believe — filled with things that no one in the United States of America believes — and with his hand on this book he will recite the oath of office.”

Towards the end of the “Rewrite” segment, O’Donnell offered up his own idea for a new inauguration tradition. “Now, wouldn’t it be better if the president’s hand was on the shoulder of one of his daughters, suggesting that he was honoring the oath of office as much as he honors Sasha and Malia?”

But O’Donnell knows that won’t happen. As he did four years ago, President Obama will be sworn in as president with his hand on a Bible held by First Lady Michelle Obama. O’Donnell notes that this will be the second time a descendent of slaves will hold the inauguration Bible. “But the holy book she will be holding does not contain one word of God condemning slavery.” But, he adds, that same book “does indeed manage to find the space repeatedly to condemn gay people.”

“And as the First Lady holds that book for the president, sitting somewhere near them will be a pastor who the Inauguration Committee will make sure is much more adept at hiding what that book actually says than Louis Giglio was.”